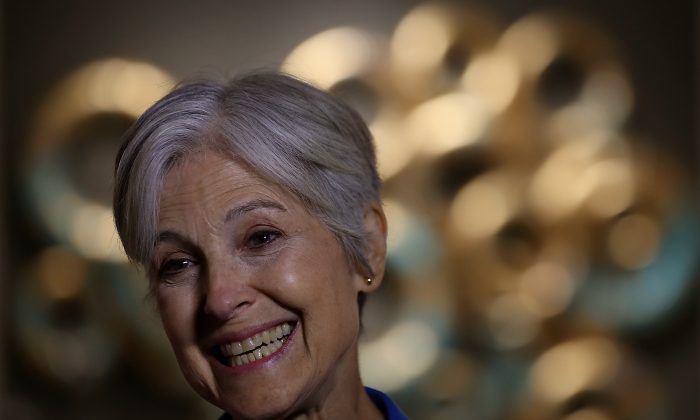 Green party nominee Jill Stein speaks to members of the press before the start of a campaign rally in New York City on October 12, 2016. (Justin Sullivan/Getty Images)
Politics

Green Party nominee Jill Stein has paid the $3.5 million fee required for a recount in Wisconsin, according to Politico.

She raised more than $6.5 million via an online fundraiser to initiate efforts for recounts in Wisconsin, Pennsylvania, and Michigan.

Wednesday is the recount filing deadline for Michigan, a state that President-elect Donald Trump won by 10,704 votes out of 4.8 million cast. The state officially revealed the figures three weeks after Election Day, calling it for Trump.

Stein has alleged voting machine irregularities could have affected the final voting tallies in the three states—a claim that she has not been able to back up.

For Michigan, Stein would have to pay $787,500 for a recount. Election officials, however, said the cost might be higher, possibly $900,000, CBS News reported.

For Pennsylvania, it’s a bit trickier, as the state has different rules. Stein had to file a lawsuit to try and force a recount because she missed the Nov. 21 filing deadline. Politico reported that it could cost $500,000 to complete a recount in Pennsylvania if the court order goes through.

“The grassroots demand for a recount in Wisconsin, Michigan, and Pennsylvania will not be stopped, and we look forward to working with the Elections Commissions in Wisconsin and the other states to see this through. We will be alerting recount advocates that we must now raise an additional $2.4 million dollars to cover this new extraordinary burden in Wisconsin,” Stein said in a statement.

“In doing so, we are committed to ensuring that a secure vote should not come at such an unconscionable cost. As citizens in a democracy, it should be our right.”