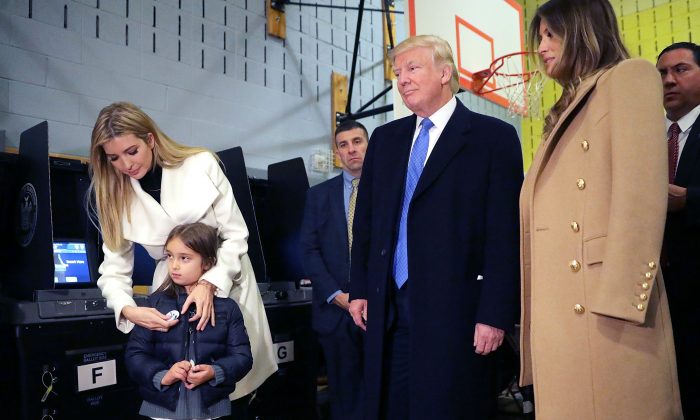 Donald Trump is joined by his wife Melania Trump (R), daughter Ivanka Trump (L) who places an 'I voted' sticker on her daughter Arabella Rose Kushner after they vote on Election Day at PS 59 in New York City on Nov. 8, 2016. (Chip Somodevilla/Getty Images)
US

Ivanka Trump, the eldest daughter of President-elect Donald Trump, is moving her family to Washington, D.C., from their home in New York, CNN reported on Dec 5.

Her husband and Trump confidant Jared Kushner will also be making the move. The couple is currently looking for a home in the Washington area, the report said.

The two have three children together: Arabella, Joseph, and Theodore.

They’re moving closer to her father under the expectation that Kushner will serve as an adviser to the president-elect, although it’s unclear what that entails—or if it violates nepotism laws.

“I think Jared Kushner, obviously [Trump’s] son-in-law is going to be very involved in decision-making,” White House chief of staff Reince Priebus told NBC’s “Today” show in mid-November. Kushner, the owner of the New York Observer, was seen with Trump when he visited the White House before Trump met with President Obama.

Barron Trump, the 10-year-old son of the president-elect, and First Lady-to-be Melania Trump will stay at the Trump Tower in Manhattan until Barron’s school year ends, earlier reports have indicated.

In an interview with Forbes, it was revealed that Kushner played a significant role in Trump’s campaign, including the tailoring of Trump’s message. “I called somebody who works for one of the technology companies that I work with, and I had them give me a tutorial on how to use Facebook micro-targeting,” Kushner elaborated on Trump’s campaign ads.

He set up a 100-person data hub in Texas that was designed to raise funds, target, and send out Trump’s message. “Our best people were mostly the ones who volunteered for me pro bono,” Kushner told Forbes magazine. “People from the business world, people from nontraditional backgrounds.”

“We played Moneyball, asking ourselves which states will get the best ROI for the electoral vote,” Kushner, who rarely does interviews, added. “I asked, How can we get Trump’s message to that consumer for the least amount of cost?”