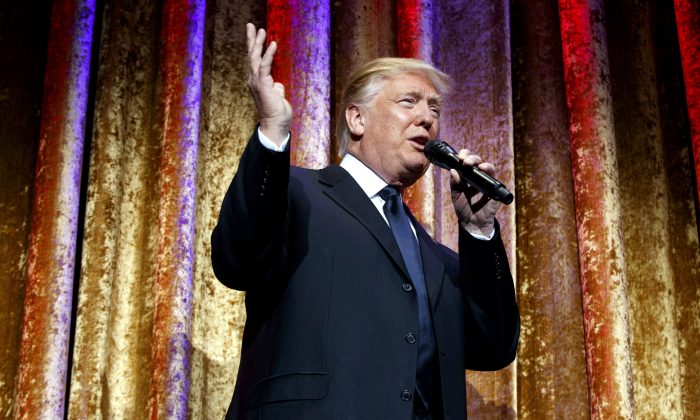 President-elect Donald Trump speaks during the presidential inaugural Chairman's Global Dinner in Washington on Jan. 17, 2017. The U.S. Congress is looking into so-called border adjustments that could affect Canada, but it’s unclear whether Trump will sign such legislation into law. (AP Photo/Evan Vucci)
Politics

McClatchy reported Wednesday that a collaborative probe is being carried out by the FBI, the CIA, the National Security Agency, and representatives of the Office of the Director of National Intelligence. The Justice Department and the Treasury Department’s Financial Crimes Enforcement Network are also looking into the matter.

One of their key missions is figuring out if Russia financed the email hacks of the Democratic Party last year.

Emails from the Democratic National Committee and Hillary Clinton aide John Podesta were leaked online by WikiLeaks. But the anti-secrecy group’s chief, Julian Assange, and operative Craig Murray have denied that Russia was their source.

Sources told McClatchy, a company that operates 29 daily newspapers in 14 states, that the group is investigating a few Americans affiliated with either Trump’s campaign, and they’re looking for ties with officials in Russia or other ex-Soviet states.

Trump recently accused U.S. intelligence officials of a “political witch hunt” against him after making claims against him.

Russia has never tried to use leverage over me. I HAVE NOTHING TO DO WITH RUSSIA – NO DEALS, NO LOANS, NO NOTHING!

“I have nothing to do with Russia – no deals, no loans, no nothing!” he wrote on Twitter.

Earlier this week, Trump described CIA chief John Brennan as “the leaker of fake news” after Brennan told him to assess the “Russia threat” rather than “talking and tweeting.”

much worse – just look at Syria (red line), Crimea, Ukraine and the build-up of Russian nukes. Not good! Was this the leaker of Fake News?

“Just look at Syria (red line), Crimea, Ukraine and the build-up of Russian nukes,” Trump wrote on Twitter on Jan. 15. “Not good! Was this the leaker of Fake News?”

Trump later said that he believes Russia meddled in the election, but he doesn’t think it changed the outcome.

Trump’s transition team has yet to comment on the McClatchy report.