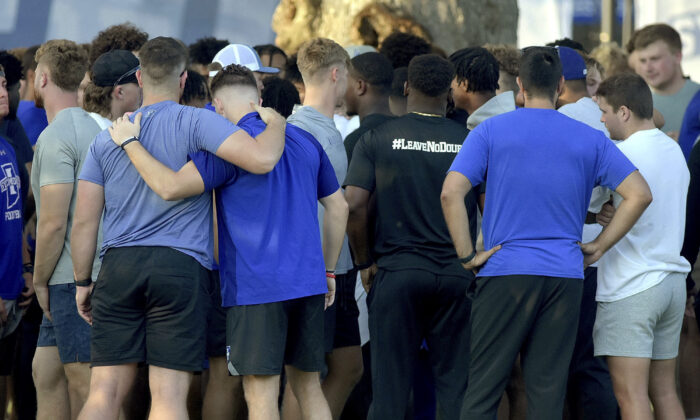 Members of the Indiana State football team console one another after a vigil at Memorial Stadium in Terre Haute, Ind., on Aug. 21, 2022, for students, including fellow football players, who were involved in a car crash earlier in the day. (Joseph C. Garza/The Tribune-Star via AP)
Crime and Incidents

TERRE HAUTE, Ind.—A single-vehicle crash that killed three Indiana State University students, including two members of the school’s football team, occurred during a thunderstorm that had left the roadway covered in water, according to a crash report released Tuesday.

The report by a Vigo County sheriff’s deputy also states that one of the two ISU students who survived the crash told officers the group of five students was returning to the Terre Haute campus after attending a house party at Indiana University in Bloomington, and that “everyone had been drinking” at the party.

That student, John Moore, 19, of Wheaton, Illinois, also said the vehicle was traveling at 90 mph at the time of the accident “but he doesn’t remember much after that,” according to the crash report.

Eubanks was a freshman linebacker who went to Warren Township High School, and VanHooser was a freshman defensive back who went to Lakota East. Musili was a sophomore who became an Indiana State student this year and wasn’t on ISU’s football team, the school said.

The crash report states that Eubanks was driving the Toyota Camry early Sunday when it went off a state highway, struck a tree in the small town of Riley, about 10 miles from the university’s Terre Haute campus, and caught fire.

The crash report states that thunderstorms and heavy rain at the time of the crash had left 3-4 inches of standing water on the roadway.

A motorist who came across the crash scene just after Eubanks’ car crashed into a tree said it was raining so hard it was difficult to see and there was also bright lightning, the report states.

That witness told officers he ran to the burning car and pulled one crash victim out of the car before another motorist helped him pull a second person from the vehicle. The witness said he initially believed everyone was out of the car but then heard screaming and realized more people were inside the burning wreckage.

Hundreds of students and others gathered Sunday evening outside the university’s football stadium for a vigil in honor of the crash victims.