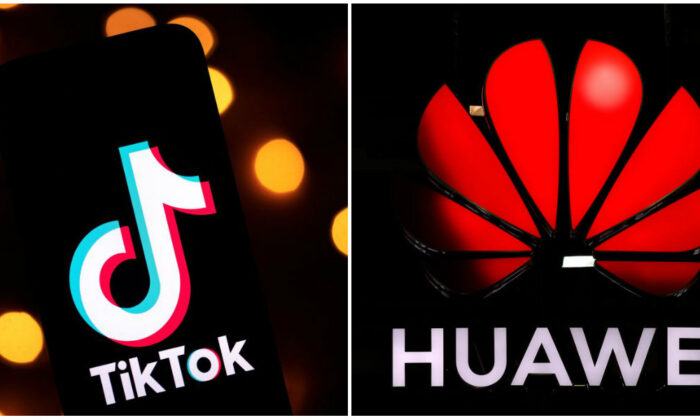 The logo of the social media app TikTok (L) in Paris on Nov. 21, 2019 and a Huawei sign in Zurich on Oct. 15, 2019. (Lionel Bonaventure and Stefan Wermuth/AFP via Getty Images)
US-China Relations

A recent report is shedding light on the roles of Chinese tech giants ByteDance and Huawei in facilitating rights abuses against Muslim minorities in the region of Xinjiang.

“All Chinese tech companies have deep ties to the Chinese state security apparatus,” the report stated.

It notes that those tech companies operate in a Chinese regulatory environment in which “concerns over the potential use of invasive systems of surveillance to erode civil liberties are largely and substantively ignored by design.”

At the same time, the Chinese Communist Party (CCP) has embedded party committees in those companies, and Chinese intelligence and security law compel individuals and entities to collaborate with national intelligence matters, making “inextricable links between industry and the Chinese party-state.”

“[The CCP] perceives the expansion of Chinese technology companies as a crucial component of its wider project of ideological and geopolitical expansion, and that they are not purely commercial actors,” the report stated.

The latest report highlights two companies—Huawei and ByteDance, the latter is known for its popular app TikTok—and their roles in Beijing’s oppression in Xinjiang.

TikTok, known as “Douyin” in China, was launched by ByteDance in 2016. A year later, ByteDance acquired fellow Chinese social media service Musical.ly for $1 billion. In August 2018, ByteDance dropped the Musical.ly brand and rolled out a revamped version of TikTok.

Along with being widely used by teens, TikTok is known for being popular among U.S. military personnel, which prompted the U.S. Army to undertake a security assessment of the app in November. That followed a public call when U.S. Sen. Chuck Schumer (D-N.Y.) wrote a letter to Army Secretary Ryan McCarthy.

“We have found that TikTok’s parent company ByteDance … collaborates with public security bureaus across China, including in Xinjiang, where it plays an active role in disseminating the party-state’s propaganda on Xinjiang,” the letter stated.

The letter, which requested a response from the U.S. Army by Dec. 6, raised concerns about TikTok’s collection and handling of user data, and called for an assessment of potential national-security risks posed by Chinese tech companies.

The U.S. State Department has estimated that more than 1 million Uyghurs and other Muslim minorities are currently being detained inside internment camps in Xinjiang, as part of the Chinese regime’s crackdown on “extremism.” Beijing claims these camps are “vocational training centers.”

Outside these camps, authorities have effectively turned the region into a police state, with Xinjiang’s population being subject to constant surveillance through a dense network of security cameras and checkpoints.

The report stated that China’s Ministry of Public Security signed a strategic cooperation agreement with ByteDance in April, allowing all levels and divisions of police units within the ministry, as well as county-level traffic police, to have their own Douyin accounts to disseminate propaganda.

In September 2018, Chinese state-run media Yaxin reported that Xinjiang Internet Police had registered its Douyin accounts, in an effort to better “govern the network” and to “raise network safety and law-abiding consciousness.”

According to the report, ByteDance worked closely with Xinjiang authorities, particularly those in Hotan, a town in the province that has been the “target of some of the most severe repression.”

Zhou Nengwen, the head of the Hotan government’s propaganda bureau, said in April that he was excited to use Douyin to “promote Hotan’s products and images,” following talks by ByteDance’s representatives at the Chinese city of Tianjin.

After conducting satellite imagery analysis, the report concluded that there are about a dozen suspected detention facilities in the outskirts of Hotan.

U.S. officials have repeatedly warned about the security risks associated with Huawei’s products and urged other countries not to use its equipment for telecommunication networks, particularly 5G.

U.S. officials and experts have expressed concerns that Huawei’s equipment could be exploited by Beijing for spying or communication disruptions due to the Chinese tech giant’s close relationship with the Chinese military, as well as national security laws that compel any Chinese company to cooperate with intelligence agencies when asked.

In May, the U.S. Department of Commerce added Huawei and 68 affiliates companies to its trade blacklist, and added 46 additional entities in August.

The report disputed a claim made by a Huawei executive during a UK parliamentary committee in June, when the executive said the company’s activities in Xinjiang occurred through “third parties.”

“That’s not correct [about the third party claim]. Huawei works directly with the Chinese Government’s Public Security Bureau in Xinjiang on a range of projects,” the report stated.

Since 2011, Huawei began working with the police department in Karamay, a city in Xinjiang, on cloud computing projects, including public video surveillance, according to the report.

“Huawei was said to have built the police surveillance systems in Karamay and Kashgar prefectures and was praised by the head of Xinjiang provincial police department for its contributions in the Safe Xinjiang program,” the report added.

In 2018, Xinjiang’s Public Security Department and Huawei signed an agreement to establish an “intelligence security industry” innovation lab in Urumqi, the capital of Xinjiang, according to the local government website. The partnership was aimed at “safeguarding Xinjiang’s social stability and long-term security.”

In May, state-run Xinjiang Broadcasting and Television Network Corp. and Huawei signed a strategic agreement in which the two sides would cooperate on areas that include internet infrastructure and 5G telecommunications, according to the report. The objective of the partnership was to realize “social stability” and promote “positive energy” in Xinjiang.

“The timeline of Huawei’s Xinjiang activities should be taken into consideration during debates about Huawei and 5G technologies,” the report stated.