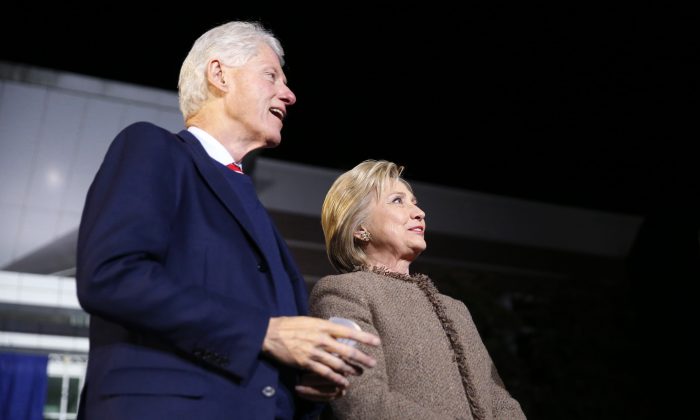 Democratic presidential candidate Hillary Clinton and her husband, former President Bill Clinton, arrive onstage to speak at a "Get Out The Vote Rally" in Columbia, S.C., on Feb. 26, 2016. (AP Photo/Gerald Herbert)
US

Several FBI investigations are underway about potential corruption in the Clinton Foundation, a report said.

The Daily Caller, citing a former senior law enforcement official, reported that several U.S. Attorneys Offices are taking part in the investigation, which is a major break from other, more centralized FBI investigations. A New York-based probe into the nonprofit corporation established by former President Bill Clinton, is being headed by Preet Bharara, the U.S. attorney for the Southern District of New York.

The unnamed official told the Daily Caller, a conservative-leaning publication based in Washington, D.C., that the U.S. Attorney’s Office in the Southern District of New York involvement “would be seen by agents as a positive development as prosecutors there are generally thought to be more aggressive than the career lawyers within the DOJ [Department of Justice].”

A spokesperson for Bharara said he would “decline comment” and FBI spokeswoman Samantha Shero said the agency doesn’t “have a comment on investigative activity,” according to the Daily Caller.

Bharara is known for his convictions on prominent political figures, namely former New York State Assembly Speaker Sheldon Silver. Silver, considered one of the most powerful men in New York state politics for decades, was convicted of accepting $4 million for helping two real estate developers and a cancer researcher.

Bharara also secured convictions on top Bernie Madoff associates. He also got a conviction against New York Republican Majority Leader Dean Skelos, who was jailed for five years as a result.

Bharara in 2009 was nominated by President Barack Obama to become the U.S. Attorney for the Southern District of New York, according to his website. “As U.S. Attorney, Mr. Bharara has applied renewed focus on large-scale, sophisticated financial frauds by creating two new units—the Complex Frauds Unit and the complementary Civil Frauds Unit. The Civil Frauds Unit has collected close to $500 million in settlements since its inception, including multi-million dollar settlements with Deutsche Bank and CitiMortgage for faulty lending practices and other fraudulent conduct,” it states.