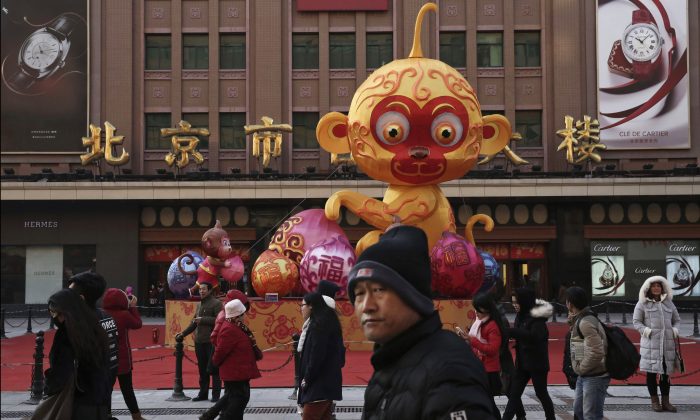 Chinese pedestrians walk passed a display for the upcoming Year of the Monkey for the Chinese New Year at a market on Jan. 19, 2016 in Beijing. (Kevin Frayer/Getty Images)
Business & Economy

After some terrible data in January, the Chinese economy is out of the woods for the rest of the year. The Chinese lunar year that is, because until Feb. 7, 2016, there are only two official data releases, neither of them terribly important.

But even if we will be spared confusing trade data, bad manufacturing and GDP figures, as well as the constant drain on foreign exchange reserves, it doesn’t mean analysts can’t come up with their own estimates of economic data and spook the markets.

Like the International Institute of Finance (IFF), for example, which said that Chinese capital outflows were as high as $676 billion in 2015.

“The 2015 outflows largely reflected efforts by Chinese corporates to reduce dollar exposure after years of heavy dollar borrowing, as expectations of persistent yuan appreciation were replaced by rising concerns about a weakening currency,” the report states.

In previous cases of this carry trade phenomenon, it was usually international banks or hedge funds doing it. This time is was Chinese corporations, which in the absence of some real economic opportunities on the ground also used to engage in real-estate speculation while the sector was still hot.

“Chinese money is going into real assets in the West and to some degree repaying foreign currency debt.”
— Charles Dumas, Lombard Street Research

This carry trade was a safe bet because the Chinese central bank guaranteed the yuan to be stable vis-à-vis the dollar or even let it appreciate a bit. This convincing value proposition boosted Chinese foreign currency liabilities from $200 billion in 2009 to $1.1 trillion in 2014.

This safe bet changed when the regime surprisingly devalued the yuan in August and openly stated it would like to have a cheaper currency, even though Charles Dumas of Lombard Street thinks the market gets the causality wrong.

“They are reading the regime’s desire to have a weaker currency because the economy is weak. The cause and effect is the other way around. It’s the weakness in the economy which is driving the currency and the market.”

Whichever came first, the chicken or the egg, there was pressure on the currency since the end of 2014 as the smart money (that is, the politically connected) started to move out.

Once the regime confirmed its new currency policy, the flood gates opened and carry traders scrambled to close a now losing position, not knowing how much the yuan was going to drop against the dollar.

But it’s not only the carry traders and the smart money who are moving their money out. Average Chinese are funneling money out of the country in record numbers as well, despite the capital controls.

“[The] data showed a broadening in the pattern of net outflows, including a significant decrease in foreign direct investment and, to some extent portfolio flows, especially debt, and a jump in unrecorded outflows reflected in errors and omissions.”

The IFF thinks these $216 billion worth of “errors and omissions” are a good proxy for capital flight.

“Chinese money is going into real assets in the West and to some degree repaying foreign currency debt,” says Dumas.

The regime desperately tried to contain the situation by openly intervening in the foreign exchange markets, spending up to $405 billion according to IFF estimates, but the yuan still dropped 5 percent since last January.

As for both the Gregorian and the Chinese year 2016, the IFF doesn’t think it will get any better. “China would see further large overall capital outflows as it continues to struggle against macroeconomic headwinds and to intervene heavily to stabilize its currency,” states the IFF report.

According to Dumas, the current monthly outflows are as high as $100 billion.