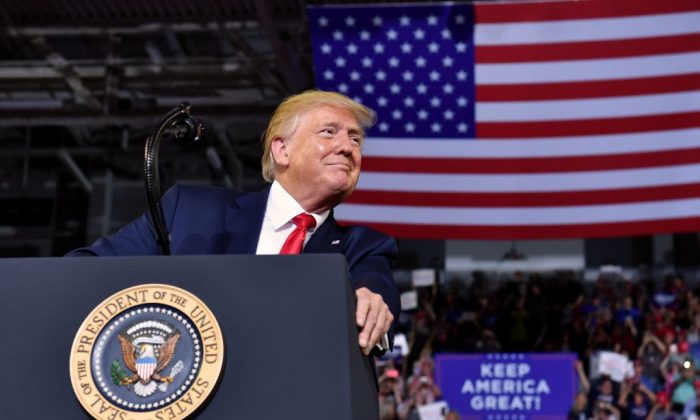 Some Democrat lawmakers have privately admitted to being outflanked by President Donald Trump as they struggle to rein in the far-left progressives in their party, according to CNN.

“The President won this one,” a House Democratic lawmaker told the news outlet’s chief Washington correspondent. “What the President has done is politically brilliant. Pelosi was trying to marginalize these folks, and the President has now identified the entire party with them.”

House Democrats appeared unified in their votes this week but I’ve spent the day talking to a bunch of them and many are extremely frustrated. All agree POTUS’s tweets needed to be condemned; they spoke under condition of anonymity so they could be candid. (Thread)

President Trump has credited the four with helping him achieve a four-point bump in the polls, after he lambasted them for bad-mouthing America, saying that they “hate our country.”

On July 17, Trump wrote on Twitter, “New Poll: The Rasmussen Poll, one of the most accurate in predicting the 2016 Election, has just announced that ‘Trump’ numbers have recently gone up by four points, to 50%. Thank you to the vicious young Socialist Congresswomen. America will never buy your act!”

According to the Rasmussen Poll, the president’s approval went up from 46 percent on July 15 to 50 percent on July 17, days after he accused the four of displaying anti-Semitic and anti-American rhetoric.

Trump also had a five percentage point net approval increase to 72 percent among members of the Republican party, compared with a similar poll that ran last week, according to a recent Reuters-Ipsos public opinion poll.

Trump’s criticisms of the squad were labeled as “racist” by many of his political opponents—namely one comment he made on July 14.

In the tweet, he suggested that the congresswomen should “go back and help fix the totally broken and crime-infested places from which they came. Then come back and show us how it is done.”

Apart from Omar, who was born in Somalia, the other three lawmakers were born in the United States.

Omar has made a number of comments condemned by lawmakers on both sides of the aisle as anti-Semitic, including claiming that American politicians only support Israel because of financial compensation.

Omar said in February in response to statements from critics. “This is why I unequivocally apologize.”

Trump went through a laundry list of things Omar has said during a July 17 rally in North Carolina, prompting the crowd to start spontaneously chanting “send her back.”