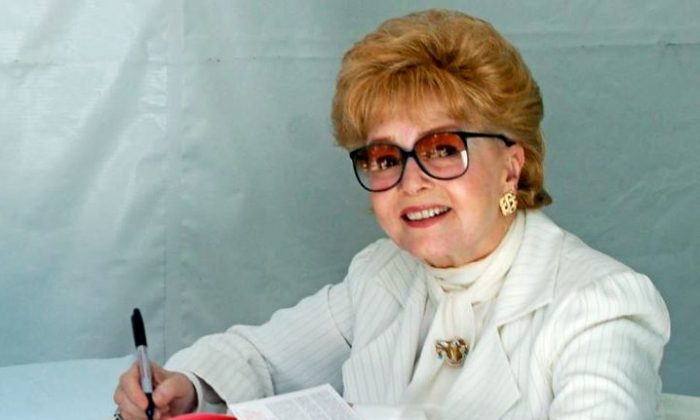 Debbie Reynolds at the LA Festival of Books. in April 2013. She reportedly suffered a stroke and was hospitalized on Wednesday (Creative Commons/Wikipedia)
Entertainment

Actress Debbie Reynolds, the mother of late “Star Wars” actress Carrie Fisher, was rushed to the hospital after reportedly suffering a stroke, said a report.

Reynolds, 84, was at her son Todd Fisher’s home in Beverly Hills, California, when someone from her house called 911, TMZ reported. Meanwhile, Entertainment Tonight has confirmed the longtime actress suffered a “medical emergency on Wednesday.”

The call was made at around 1 p.m. local time. According to the website, sources close to the family told them “they called 911 to report a possible stroke.”

Reynolds—who starred in “Singin’ in the Rain” in 1952 and “The Unsinkable Molly Brown” in 1964—was then taken to a nearby emergency room, the report stated. She was at Todd’s home talking about funeral plans for her daughter.

Fisher, 60, died on Dec. 27 after reportedly suffering a heart attack on Dec. 23. She was on an 11-hour flight from the U.K. to Los Angeles when she suffered a cardiac arrest and was rushed to a hospital.

“Thank you to everyone who has embraced the gifts and talents of my beloved and amazing daughter,” Reynolds wrote in a post on Facebook after Fisher’s death.

“I am grateful for your thoughts and prayers that are now guiding her to her next stop,” she wrote.

Other details about Reynolds’ condition were not immediately clear.

William Shatner, a friend of Reynolds, wrote on Twitter: “I heard about Debbie Reynolds. Let’s pray that it’s nothing serious.”

Just days before her daughter’s death, Reynolds tweeted that Fisher was in “stable condition,” adding: “If there is a change, we will share it. For all her fans and friends. I thank you for your prayers & good wishes.”

Reynolds was close to Fisher prior to her death but the two had a sometimes tense relationship.