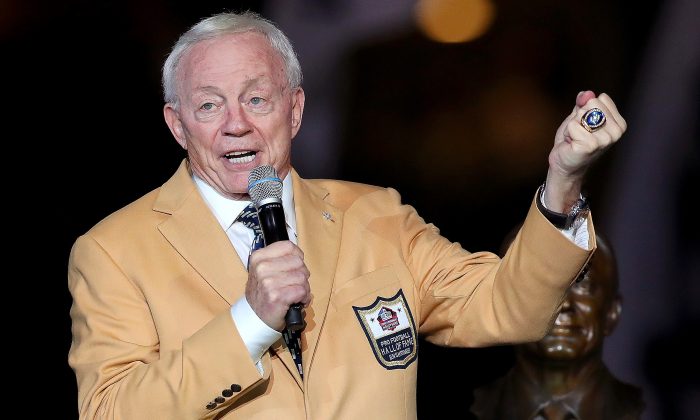 After Dallas Cowboys owner Jerry Jones said that his team would stand on the sidelines and stand at attention during the playing of the U.S. national anthem, he was ordered not to talk about the issue by NFL officials, the Fort Worth Star-Telegram reported on July 29.

Jones told several local television stations around Dallas who had booked him for interviews on Sunday that questions about the national anthem aren’t permitted, according to the report. The league, he said, told him to stop speaking on the issue.

A Fox4 reporter, Mike Doocy, canceled his interview with the Cowboys owner. The Cowboys public relations staff told him that he can’t ask any questions about the anthem, and he made the decision to cancel the interview.

Jones completed the interview with other TV stations as scheduled without talking about the anthem.

“Our policy is you stand for the anthem, toe on the line,” Jones said earlier in July, according to the Los Angeles Times.

The league and the NFL Players Association are working to come up with a national anthem policy agreeable to both sides before the season starts in September.

The controversy over the protests, which are said to be against police brutality against black people in the United States, has sharply divided the league and prompted many fans to stop watching the games.

“I don’t think that’s the time or the venue to do so,” he said. “When you bring such controversy to the stadium, to the field, to the game … it takes away from the joy and the love that football brings a lot of people,” he added, according to the Dallas News.

In May 2018, the NFL said it will implement a new policy that would force players to either stand at attention on the sideline or wait in the locker room.

The NFL, however, opted to halt the policy after criticism along with a report saying that the Miami Dolphins would consider suspending players who protested during the anthem.

“The NFL and NFLPA, through recent discussions, have been working on a resolution to the anthem issue,” the NFL and the NFL Player’s Association wrote in a joint statement in mid-July. “In order to allow this constructive dialogue to continue, we have come to a standstill agreement on the NFLPA’s grievance and on the NFL’s anthem policy.”