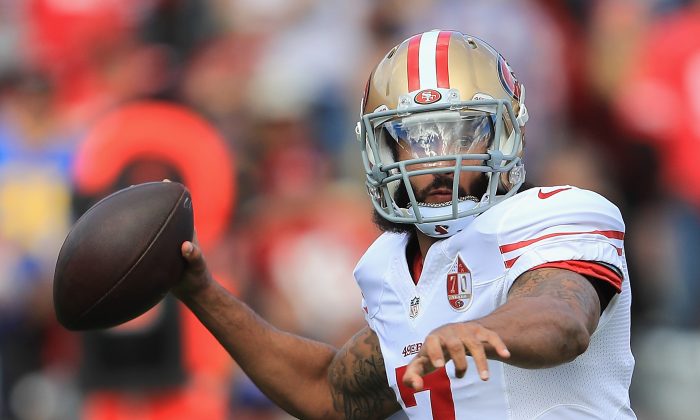 Colin Kaepernick, the San Francisco 49ers quarterback, appears to be done with the team, according to an ESPN report.

Kaepernick, who made headlines this season for protesting the U.S. national anthem, is expected to opt out of his contract and become a free agent, the report said. The opt-out period is between March 2 and March 7, reported the Bay Area News Group.

The 29-year-old quarterback, drafted in the second round by the 49ers in 2011, has yet to make a public comment about the reports.

Last year, he restructured his contract with the 49ers. In the deal, he gave up $14.5 million in injury guarantees in exchange for a chance to be a free agent sooner. His original deal was slated to end in 2020.

In the past season, he threw for 16 touchdowns against four interceptions in 12 games.

However, Kaepernick presents a problem to any team who is willing to take him: his kneeling during national anthems.

Kaepernick drew considerable backlash from fans for his antics, with some saying they would boycott the NFL.

The quarterback refused to stand because the United States “oppresses black people and people of color,” he told NFL.com during the preseason.

He also faced criticism from Cuban-Americans for wearing a T-shirt with Malcolm X meeting with the late Cuban dictator Fidel Castro. Amando Salguero, a Miami Herald columnist of Cuban descent, described him as an “unrepentant hypocrite.”