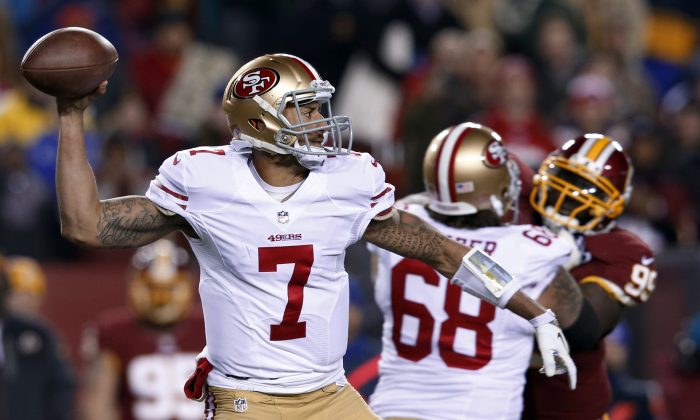 Colin Kaepernick can protest the national anthem and the American flag, but he can’t take the flag off his helmet, the NFL confirmed.

His team, the San Francisco 49ers, are slated to play the San Diego Chargers on Thursday. As Pro Football Talk (PFT) reported, his helmet includes an American flag.

If he were to take off the flag decal, he would be punished, league spokesman Brian McCarthy told PFT.

But it’s unlikely he’ll remove the flag. He was spotted wearing his flag-adorned helmet during a preseason game against the Green Bay Packers.

Why doesn’t he refuse to wear oppressive helmet with flag on it. Then put him in for one play. #colinkaepernick pic.twitter.com/HYOkyQprpI

Kaepernick, 28, is expected to play against the Chargers. He hasn’t stood for the flag for the first three preseason games because he won’t “show pride in a flag for a country that oppresses black people and people of color,” he told NFL.com.

On Tuesday, he said he doesn’t fear for his safety.

“No, because if something happened, you’d be proving my point,” Kaepernick told the San Jose Mercury News. He added, “I knew what I was walking into. That’s why it’s a sacrifice.”

49ers coach Chip Kelly said Kaepernick will play on Thursday, adding that Blaine Gabbert, who started in the first three exhibitions, won’t play. “We’ve got a good understanding of where Blaine is,” said Kelly.

Chargers Will Salute Military While Colin Kaepernick Is Slated to Play

The Chargers, meanwhile, will celebrate their annual Salute to the Military, which will include a gigantic flag. “God Bless America” will also be sung by a Navy officer during halftime to honor Vietnam War veterans.

A California congressman said Kaepernick should expect boos. “I don’t think we’d have a player like him, frankly, I think he’d be booed out or the owners would be forced to not accept someone like him,” he said, adding that a “city like San Diego is too patriotic.”

“He probably fits in very well in San Francisco,” Republican Rep. Duncan Hunter told ABC News. “That might be one of the reasons that he’s able to do this or feel confident about it.”