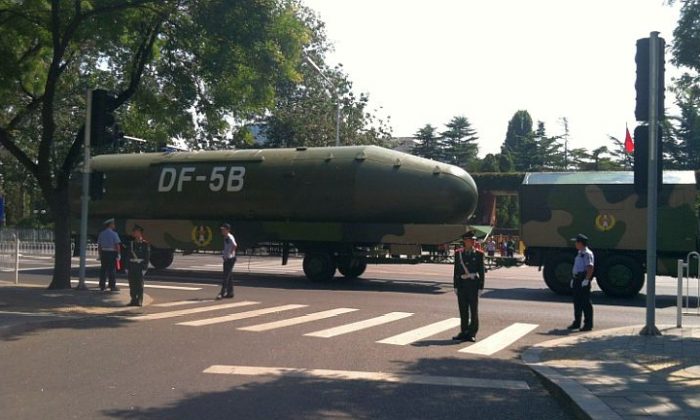 China has tested a new version of a long-range missile that can hold 10 nuclear warheads, according to a report on Tuesday.

The test of the DF-5C missile was conducted earlier this month, using 10 multiple independently targetable reentry vehicles (MIRV), the Free Beacon reported. They were inert.

Two officials familiar with China’s missile test said it was fired at the Taiyuan Space Launch Center in central China and flew into the “western Chinese desert,” according to the Washington Free Beacon, which has reported on a number of China’s missile tests.

As the paper noted, the test is significant because it suggests that the Chinese regime is increasing the number of warheads in its military. Experts say China has around 250 nuclear warheads.

“The [Defense Department] routinely monitors Chinese military developments and accounts for PLA capabilities in our defense plans,” Ross was quoted by the paper as saying.

“I am fully aware that China continues to modernize its nuclear missile force and is striving for a secure second-strike capability,” Hyten told the Senate Armed Services Committee in September. “Although it continues to profess a ‘no first use’ doctrine, China is re-engineering its long-range ballistic missiles to carry multiple nuclear warheads and continues to develop and test hyper-glide vehicle technologies,” Hyten added.

In 2015, The Diplomat reported that China showed off some of its missiles during a military parade—the first time the weapons were publicly displayed. It wrote: