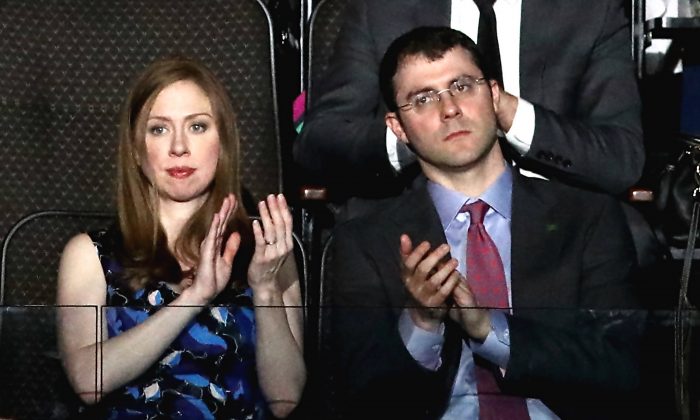 Chelsea Clinton and along with her husband Marc Mezvinsky clap as they listen to speakers on the second day of the Democratic National Convention at the Wells Fargo Center in Philadelphia, Pennsylvania on July 26, 2016. (Win McNamee/Getty Images)
US

The hedge fund of Former first daughter Chelsea Clinton’s husband closed in December 2016, according to a new report.

Marc Mezvinsky, Chelsea’s husband and the son-in-law of former President Bill Clinton and Hillary Clinton, co-founded Eaglevale Partners, which is based in New York.

But Bloomberg News reported on Wednesday that Eaglevale is now in the process of returning its money to clients; the news agency cited a source close to the firm for its report.

It’s unclear if the firm’s closure was connected to Clinton’s devastating election loss in November.

The hedge fund is reported to have lost a significant amount by betting on Greece—with one portion of the fund dropping by as much as 48 percent in a year, the Wall Street Journal reported in February 2015.

The firm was started in 2011 by Bennett Grau, Mark Mallon, and Mezvinsky. They had worked for Goldman Sachs prior to that.

Eaglevale or its founders have not publicly commented on the development.

The Clinton Foundation, meanwhile, announced in January that it was closing the Clinton Global Initiative while laying off a number of employees due to drops in donations after Clinton’s loss.

Mezvinsky is the son of former Congressman Edward Mezvinsky, who served five years in jail for defrauding friends and family members out of $10 million dollars through a Ponzi scheme.

Clinton and Mezvinsky got married in 2010.