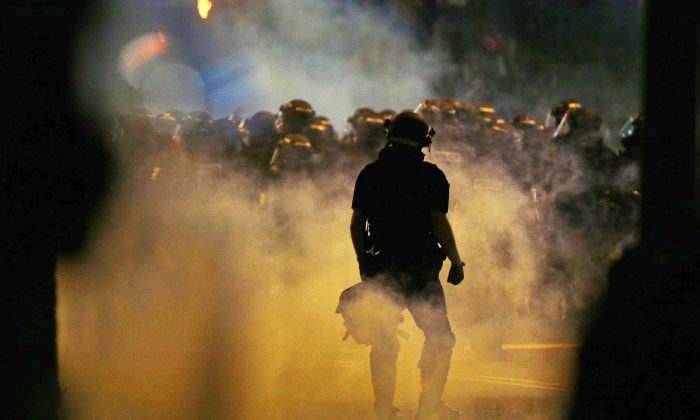 Several media outlets said that their reporters or photographers were assaulted or injured during the second night of protests in Charlotte, North Carolina, following the shooting of black man Keith Scott.

According to local news outlet WCCB, several people tried to put a news photographer into a flaming trash can before police came to his aid. The station tweeted that its reporters “witnessed protesters try to throw still photographer into fire in Uptown” Charlotte.

A video showing the alleged incident was later uploaded on Twitter, but it’s unclear exactly what happened, as police can be seen obscuring the view. Toward the end of the clip, a photographer can be seen lying on the ground next to a fire in the middle of the street.

Meanwhile, WCNC TV crew members were taken to a nearby hospital “after being attacked” by rioters.

WLTX reporter that two of its journalists were injured on Wednesday night. “Chef Photographer Eric Alkire and reporter/weekend anchor Mary Sturgill were among the group of journalists that were in the middle of some of the protests that were taking place,” the station said.

They were hospitalized and some equipment was damaged.

A CNN reporter, Ed Lavandera, was hit by a protester, and it was captured on camera.

The governor of North Carolina, Pat McCrory, declared a state of emergency and said he would deploy the state National Guard and Highway Patrol to Charlotte.

Officials confirmed a civilian was shot during protests and is currently on life-support in critical condition. Some reports claimed that the victim had died.

At least four officers have suffered non-life-threatening injuries during the protests.