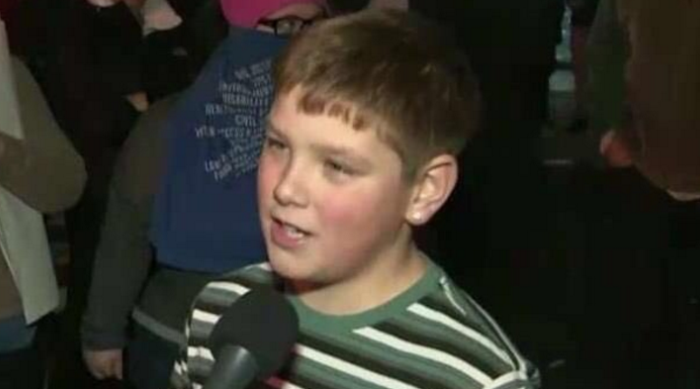 The boy who was captured in a Fox News clip admitting that he started a fire at protests during President Donald Trump’s inauguration is reportedly the son of TV host and actor Drew Carey.

The boy, whose name is Connor, told the Fox host on live TV, saying, “Screw our president.”

TMZ reported that the boy is the 11-year-old son of Carey, who is the host of “The Price Is Right” and is the former host of “Whose Line Is It Anyway” and star in the “Drew Carey Show.”

Carey and Connor’s mother weren’t pleased with his actions. “We’re told Drew and Connor’s mom were upset about how he expressed himself to the reporter, and talked to him about his language,” TMZ reported, citing a source.

A source said that Connor also “regretted his choice of words” after his parents talked to him.

In the Fox interview, Connor tells the reporter: “I actually kind of started this fire.” When asked why, he then said, “Because I felt like it, and because I’m just saying, ‘screw our president.'”

Remember this kid? Turns out his dad is #DrewCarey pic.twitter.com/K2oYjbNVU9

TMZ also captured a video of Drew Carey on the street near a rally on Jan. 20, who said that he was “having dinner … and my kid wanted to see [the protests].”

“I didn’t vote for either one of them,” Carey said. “I’m here because I’m hosting a veterans ball” in Washington, D.C. “It’s all Medal of Honor winners. It’s nothing like this,” he added, comparing the ball to the street protests.