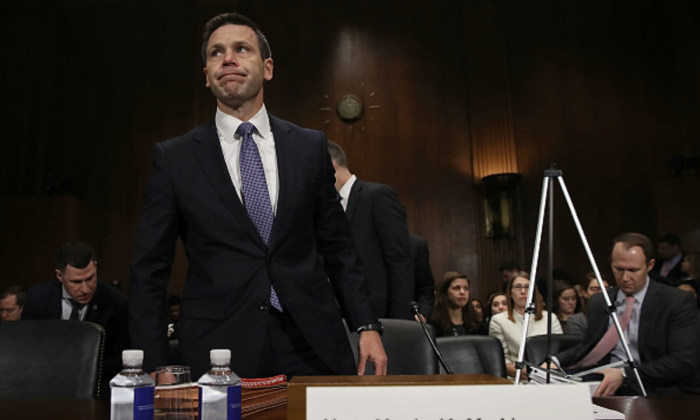 Acting Department of Homeland Security Secretary Kevin McAleenan leaked the timing and location of upcoming raids by immigration enforcement authorities in order to sabotage the operations, according to five unidentified current and former officials who spoke to The Washington Examiner.

President Donald Trump postponed the raids by two weeks on June 22, writing on Twitter that he did so at the request of the Democratic lawmakers, who asked for extra time to come up with a solution to the border crisis. All five officials told the Examiner that Trump called off the plan due to the leak.

Trump revealed on June 17 that Immigration and Customs Enforcement (ICE) would begin deporting illegal aliens in vast numbers sometime the following week. The president didn’t disclose the exact timing of the operation or the location of the planned raids. Four days later, on June 21, The Washington Post reported that the raids would begin on June 23 in Houston, Chicago, Miami, and Los Angeles.

The Washington Post story, written by a reporter who traveled with McAleenan by plane prior to the publication of the leak, includes several unattributed accounts detailing how McAleenan argued against large-scale raids. McAleenan instead advocated for small-scale operations that wouldn’t draw as much media backlash, the Post reported.

“I know he has not approved of this operation for months,” one person told the Examiner. “The president wouldn’t leak that. ICE wouldn’t leak that. There’s only a few people involved in these discussions. … The only one who could have shared the details of those operations were Kevin [McAleenan].”

“That’s our belief,” another official said, when asked if McAleenan was the source of the leak. “The secretary was not supportive from day one.”

A third official told the Examiner that McAleenan “cares more about what liberals and ‘Never Trumpers’ in Congress and the media think of him [than] achieving the express mission of his department.”

“This will leave an un-erasable mark on his tenure,” the third official wrote in a text message to the Examiner.

In an interview with Fox News on the heels of the Washington Post leak, former ICE acting Director Thomas Homan accused McAleenan of resisting the planned raids.

“You’ve got acting Secretary of Homeland Security [McAleenan] resisting what ICE is trying to do. In the Washington Post story, and numerous media outlets, he does not support this operation,” Homan told Fox.

“And I tell you what, if that’s his position, then he’s on the wrong side of this issue. You don’t tell the men and women of ICE a day before they go out there to do this operation.”

Homan said he was aware who the leak came from. In addition to tipping off illegal aliens, the leak also put ICE officers in danger, Homan added.

“That story only benefits one person,” Homan said, shortly after criticizing McAleenan.

Acting ICE Director Mark Morgan told reporters last week that the planned raids are necessary to maintain the integrity of the immigration system. Officials also want to use the raid to send a message to families planning to illegally come into the United States.

Nearly a million illegal aliens with final removal orders are in the United States. ICE is averaging 7,000 deportations per month.

The planned raids would specifically target 2,000 illegal aliens who were issued final removal orders after receiving due process on expedited dockets in immigration courts.

“The people that ICE will apprehend have already been ordered to be deported. This means that they have run from the law and run from the courts. These are people that are supposed to go back to their home country. They broke the law by coming into the country, & now by staying,” Trump wrote on Twitter on June 22.