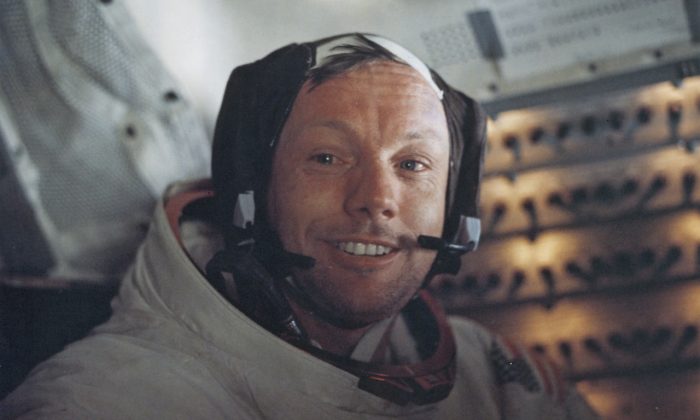 Astronaut Neil Armstrong, Commander of NASA's Apollo 11 lunar landing mission, inside the Lunar Module the 'Eagle' on the surface of the Moon during the mission on July 20, 1969. (Space Frontiers/Getty Images)
US News

CINCINNATI—An Ohio hospital paid the estate of astronaut Neil Armstrong $6 million in a confidential agreement to settle allegations that post-surgical complications led to Armstrong’s 2012 death, according to court documents and a report in the New York Times.

The 2014 settlement went to 10 family members, including Armstrong’s two sons, sister, brother, and six grandchildren, according to documents filed with the Hamilton County Probate Court in Cincinnati which were publicly available on Tuesday, July 23. Armstrong’s widow, Carol, did not receive any money in the settlement.

Armstrong’s sons, Mark and Rick, contended care provided by Mercy Health-Fairfield Hospital cost their father his life, according to the New York Times.

The 50th anniversary of Neil Armstrong’s first steps on the moon was celebrated on Saturday, July 20. He died on Aug. 25, 2012.

A Sept. 24, 2014 motion to seal the settlement said the hospital and its caregivers stood by the treatment they provided.

“However, the hospital, on behalf of itself and the health care providers, agreed to a confidential settlement of $6 million to avoid the publicity the Estate might have initiated on behalf of certain members of the family if settlement had not been reached,” the document said.

Hospital spokeswoman Maureen Richmond declined to offer specifics on the matter, saying she was unable to discuss any individual’s care.

In an email statement to The Associated Press, she added: “The public nature of these details is very disappointing—both for our ministry and the patient’s family who had wished to keep this legal matter private.”

Messages were left for Armstrong’s widow and sons, and for Wendy Armstrong, Mark’s sister and a lawyer involved in motions to seal the settlement.

Carol Armstrong told the New York Times she signed off on the settlement in her role as executor but received no part of it.

Neil Armstrong was admitted to the hospital in August 2012 for vascular bypass surgery, according to a Sept. 24, 2014 motion filed by Carol Armstrong seeking to have the settlement approved.

“He underwent the cardiovascular surgery, but post-surgical complications arose and he subsequently died,” the motion said.

Remembering the Historic Moment of Apollo 11

On July 20, 1969, the Apollo 11 mission first put a man on the moon and has become an iconic moment in American history, and 50 years later, the nation hopes to reach further.

Vice President Mike Pence commemorated the 50th anniversary of the first step on the moon at the Apollo 11 launch site at Florida’s Kennedy Space Center on Saturday, July 20, and said that the Apollo 11 is the only event of the 20th century that “stands a chance of being widely remembered in the 30th century,” and repeated that the Trump administration will put Americans back on the moon by 2024.

Under President @realDonaldTrump’s leadership, I’m proud to report America will return to the Moon within the next five years—and the next man and the first woman on the Moon will be American astronauts! pic.twitter.com/TIRzHTc4zO

Trump honored astronauts at the White House on Friday, July 21, saying, “Tomorrow will represent 50 years from the time we planted a beautiful American flag on the moon.” The moon landing, he added, is “considered one of the great achievements ever.”

Trump also said that he wants to go a lot further, “We’re going to the moon, but then we are going to mars.”

According to NASA, an estimated 650 million people around the world watched the moon landing on TV as Neil Armstrong planted his foot on the moon.