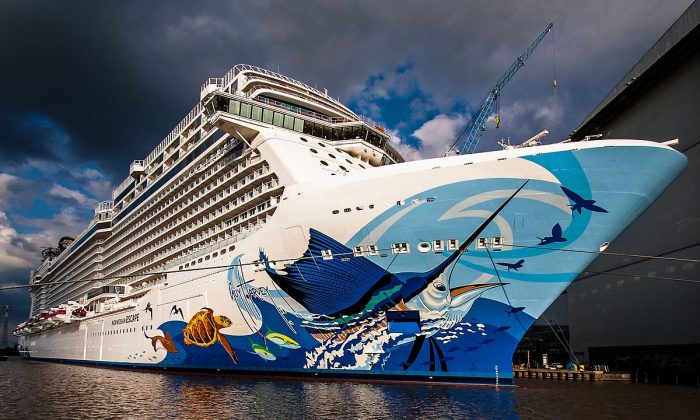 The Escape (Arno Redenius / WikiPedia)
US

4,000 People Who Fled Irma on Cruise Ship Stuck in Mexico

About 4,000 people are stuck on a cruise ship off the coast of Mexico waiting to return home.

Two of Norwegian Cruise Line’s ships, the Norwegian Escape and the Norwegian Sky, were sent back early to Miami before Hurricane Irma struck Florida. The cruise liner awarded passengers a pro-rated refund for part of the trip that was missed. Those who had no hotel or ability to leave Florida were given a safe place to stay by allowing them to sail back out to sea on the cruise liner Escape, to wait as Irma passed over the region, USA Today reported.

As of Monday, Sept.11, according to the New York Post, the 4,000 passengers were stuck on the cruise ship and are waiting to go home.

“It’s just awful,” said Stephanie Smith from Washington, DC, who has been on the Norwegian Escape since Sept. 2. “I just want to go home.”

The Post reported that the Escape is stationed in Cozumel, Mexico.

“It’s really frustrating and extremely humid and hot here,” said Smith, adding that passengers are being charged extra for bottled water and Wi-Fi.

The ship is slated to go back to Miami on Tuesday, the report stated.

Michael Davis, who lives in Irma-ravaged St. Augustine, Florida, said he wants to get back home.

“Once they said, ‘We’re heading back,’ then the mood shifted from vacation time to, ‘Alright, let’s get home and get it taken care of,'” said Davis, 42, reported The Associated Press.

In a statement last week, Norwegian Cruise Line said that guests who got on the cruise ship shouldn’t be anxious because they couldn’t guarantee when the ship will get back to Miami.

“We said to guests that we cannot confirm when or where you’ll be coming back, but obviously we’ll make every effort to return the ship to port as soon as it’s safe to do so,” said Norwegian Cruise Line spokeswoman Vanessa Picariello, AP reported.

“Guests will enjoy a cruise to nowhere and be able to be safe and out of the storm,” she said last week.