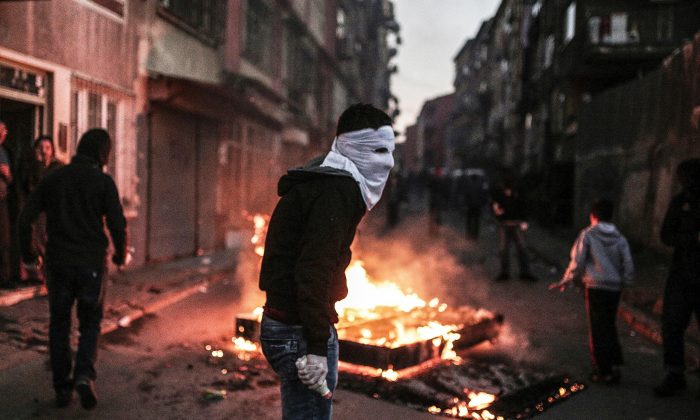 A masked protester holds a petrol bomb during clashes with Turkish police using water cannons and tear gas to disperse a demonstration in Istanbul, protesting security operations against Kurdish rebels in southeastern Turkey, on Dec. 20, 2015. The number of Kurdish rebels killed in a massive Turkish military offensive in the restive southeast has jumped to 115, as the operation entered its fifth day. The government has imposed curfews in the mainly Kurdish towns of Cizre and Silopi as security forces battle militants linked to the Kurdistan Workers' Party (PKK). (Cagdas Erdogan/AFP/Getty Images)
Middle East

Most of the casualties were centered in the southeastern towns of Cizre and Silopi, both under 24-hour curfew, with 98 rebels killed, according to Anadolu Agency. Other casualties occurred in the provinces of Mardin and Diyarbakir.

The government says militants linked to the outlawed Kurdistan Workers’ Party, or PKK, have placed explosive devices, dug trenches and set up barricades in these areas. Turkey has vowed to press ahead with the operations until the region is clear of rebels.

On Monday, President Recep Tayyip Erdogan said the operations would continue and vowed that the “terrorist organization” along with its supporters “will be buried in the trenches they have dug.”

Turkey Will Withdraw More Troops From Iraq After US Request

In Cizre, the flashpoint of operations, columns of smoke rose from residential areas as a military helicopters and armored vehicle scoured the area. The sound of heavy gunfire and sporadic shelling echoed in the streets, according to residents.

In the eastern province of Bitlis, two soldiers were killed and another six were wounded in a roadside bombing, according to Anadolu. The agency said more than 200 soldiers have been killed since the collapse of a two-year cease-fire in July.

Fighting between Turkish security forces and the PKK, including its youth wing, has increasingly focused in urban centers, displacing thousands of residents from the southeast.

The escalating violence has dashed hopes for the resumption of peace talks between the state and PKK, which have fought a three-decade conflict that has killed more than 30,000. The latest violence reminds many here of the worst bloodshed of the 1990s.