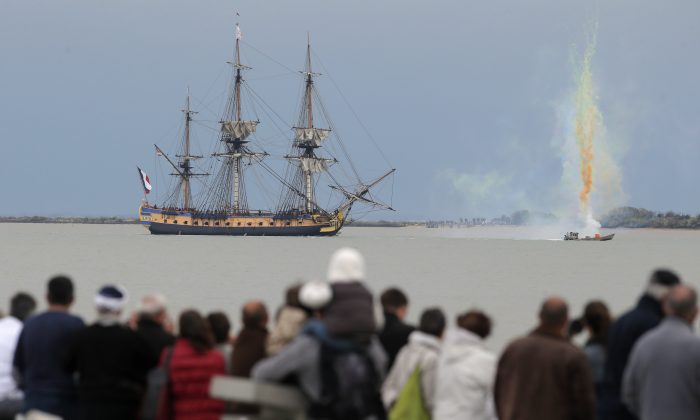 Onlookers gather to watch fireworks crackling around the replica of the frigate Hermione, used to bring French troops and funds to American revolutionaries in 1780, sailing near Fouras, southwest France, on his way for its transatlantic voyage, Saturday, April 18, 2015. The voyage, rich with diplomatic symbolism, will take the 65-meter (213-foot) Hermione along the same path its namesake took under Frances Marquis de Lafayettes command 235 years ago, retracing a journey that laid the foundation of French-American relations. (AP Photo/Francois Mori)
Europe

Replica of Revolutionary War-Era French Ship to Arrive in US

YORKTOWN, Va.— A replica of the French tall ship that brought General Marquis de Lafayette from France to America in 1780 is set to arrive in Yorktown, Virginia, on Friday as part of a 12-city tour along the East Coast. Here are three things to know about the ship and its journey.

THE HISTORY: Lafayette brought news that France was sending 5,500 troops to fight the British during the American Revolution. The Hermione was also among the French ships that participated in a naval blockade that cut off support to British troops during the decisive Battle of Yorktown in 1781. British General Lord Charles Cornwallis surrendered to General George Washington, leading to the end of the American Revolutionary War.

THE SHIP: Construction on the Hermione began in France in 1997, based on exact line drawings from its sister ship La Concorde. The Hermione has three masts, is 185 feet tall, 216 feet long and displaces 1,166 tons of water. There are 1,000 pulleys, 26 cannons and 242 crew members on the frigate, which is made of oak, conifer, iron and lead.

THE JOURNEY: The Hermione left Rochefort, France, in April and stopped in the Canary Islands off the coast of Africa before transiting the Atlantic. On Tuesday, the Hermione was greeted by U.S. Navy warships off the coast of Virginia. The newly built ship’s stops include Baltimore, Philadelphia, New York and Boston. The Hermione’s final stop in North America will be Lunenburg, Nova Scotia, on July 18.