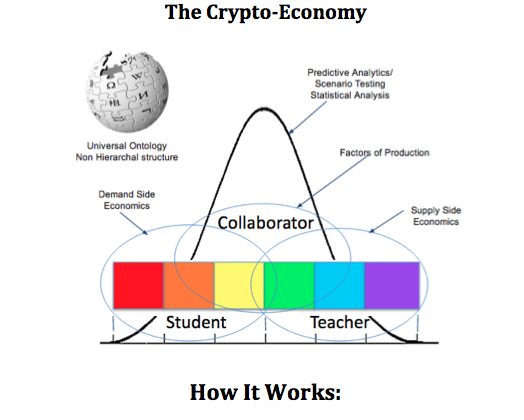 The Curiosome in action. (Courtesy of the Ingenesist Project)
News

Everybody who has ever gone job hunting asks himself these questions: Am I better than the competition? Do my specific skillsets match the ones the employer is looking for? How do I cram all this information on one page to successfully sell myself?

Dan Robles at Ingenesist wants to do away with all these daunting questions and replace the traditional résumé with a broader collaborative system.

We’re just trying to replace the résumé. We believe there are three problems in society, which are causing all of the other problems. The big three problems start with competition: We’re killing each other, we’re beating each other up for scarce resources, scarce jobs, scarce money, scarce land, water, everything. We’ve made these things scarce in the name of competition.

The second problem is asymmetric information. Competition is okay except when one side has better information than the other side. Then there’s moral hazard to take advantage of the person with worse information for personal gain. This is not to say that people are bad, this is just the game we live in. It is what it is. Where competition and asymmetric information meet is called a hierarchy, so we rank each other on a scale of 1 to 10, or winner loser, good bad, better worse, and this is extremely limited.

So you’ve limited the person. These three individuals are all engineers, they took the same test, they studied the same physics and they know the same things but they could never interchange. This is convenient for corporations because it keeps people sequestered, it takes away their choices of work elsewhere.

How can we change this?

What we did is invent this thing called Curiosumé and it gets rid of all three of those things while also preserving the benefits of capitalism.

Then you rate yourself on a scale of student to teacher. We’ve got six segments in there for six sigmas that represent a bell curve distribution. What you do is pick somewhere between student and teacher. If you’ve got some knowledge on a certain subject and you want to participate and you want to learn more then you’re somewhere in the middle. What you’ve done is, you’ve created supply and demand for knowledge. The students are your demand and teachers are your supply.

Two people toward the center, they would interact as collaborators. This represents your factors of production so your basic economic principles are intact. You could still produce things, and you’ve got a flow of supply and demand, which is going to keep your economy running.

Then it’s a very, very simple matter to match supply and demand since the distribution is on a six-sigma bell curve. You could look at the probabilities, immediately tell the probability of being able to meet a certain goal.

Curiosumé also does not have anything to do with your race, your religion, your physical attributes, or your gender identity. None of those things, the color of your skin, your height, your weight, none of those factors that we generally use to classify each other are now present at all.

So you’ve really leveled the playing field, you’ve really created symmetric information, you’ve eliminated competition and the things that hold us back as a civilization. Yet you still have the basic tenets of capitalism in front of you and this is what we call social capitalism.

Dan Robles is the director of The Ingenesist Project, a worldwide network tasked with developing systems and methods supporting the next economic paradigm. Dan is a licensed professional engineer and holds an Master of Business Administration from Seattle University.