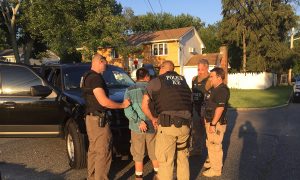 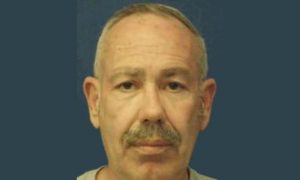 Dewayne Denis, a Level 3 sex offender, panhandles on the sidewalks of Utica, New York (Screenshot via WKTV)
US News

A Level 3 registered sex offender with a long list of convictions has been standing on a corner in Utica, New York, holding a sign claiming he is a veteran and asking for money.

Not surprisingly, a lot of people are outraged.

WKTV of Utica reported that Dewayne D. Denis has been begging for money along with other panhandlers on the sidewalks of Utica. Most people are not happy about having to deal with panhandlers—when they learn that their donations might be supporting a sex offender, they tend to be indignant.

Another resident, John Korzeniowski, opined, “I don’t like none of it. I got children, a young child of my own. My daughter is 11 so I don’t like them around. Even around the area, so … I think they should be arrested for panhandling.”

Panhandling has been judged to be constitutionally protected, according to the Utica Police Department.

In a statement the police said, “The Utica Police Department is aware of the concerns of people begging or panhandling in different locations in throughout the city.

“The Utica Police Department continues to monitor this situation and if someone commits a crime or an infraction they will be arrested or cited accordingly.”

The Police Department advised people that instead of giving money to homeless people it would be better to donate to organizations, which help homeless people.

Former panhandler Jim Georgia told WKTV, “He may have sex offender on his list in the past, but is he continuing doing that? You know, did he meet up with his comeuppance, serve his time and get out? You know, I look at it this way: if he served his time, he ain’t repeating his past offense, then I can’t hold a grudge, you know.”

Thomas Paine lives in Canastota, about 25 miles west of Utica. He told WKTV that Denis was hurting all the other panhandlers.

“He’s ruining it for the rest of the people because now you got to put that on the news because of what he is, so it’s going to slow everything back down, because everybody that drives by is going to look at people and say, oh, well, is he one too, because we’re out here doing the same thing.”

A Long Record of Repeated Offenses

Dewayne Denis is considered a Level 3 sex offender—that is, he is very likely to repeat the offense.

A quick glance at his rap sheet shows that to be a fact.

His first arrest for a sex offense came in November 2008, when he was convicted of overpowering and forcibly touching a person, according to Syracuse.com.  He was jailed and served his time.

On April 10, 2013, Denis was arrested for committing lewd acts in public, and for not reporting a change of address, the Utica Observer-Dispatch reported.

Denis was arrested again on May 9, 2014, for exposing himself to a woman on a street in Utica, Syracuse.com reported. While inside the police station, Denis exposed himself to a female prisoner in a holding cell, earning himself a second charge.

He was arrested on Sept. 13, 2016, for again failing to report a change of address, something he is required to do as a registered sex offender, Policearrests.com reported.

Then, on June 6, 2017, Denis was arrested on two charges, patronizing a prostitute and stalking, again according to Policearrests.

According to the Utica Police Department Facebook page, Denis had repeatedly followed a woman through downtown Utica, causing her to fear for her safety.

Denis was arrested again on Jan.22, 2018, for a non-sex-related offense. According to Mugshot.com he was booked for petit larceny, criminal obstruction of breathing & blood circulation, and harassment in the second degree.

Some residents told WKTV they weren’t absolutely against panhandlers but didn’t like the idea of supporting a sex offender.

When asked if he objected to giving change to a sex offender, Pete Giordano of Deerfield New York replied, replied, “Ahh, I’m afraid so, because you don’t know. It puts that doubt in your mind and now you’re supporting a sex offender. That’s not the right thing to do.”

In the comments section of the article on WKTV’s website, people voiced similar concerns.

Kathleen Morse posted, “This guy followed my friend through the Wal-Mart in Utica and followed her to her car. This happened at 7am in the morning. Luckily he didn’t harm her. He definitely scared her. We urged her to contact the police about the situation but she didn’t want to.”

Some people were most upset that Denis portrayed himself as a military veteran.

Al Marshall responded, in part, “You don’t say I am a Vet! Unless you have served!!!”

Jeff Alberico added, “claiming to be a vet … stolen valor much??? maybe some actual vets should call him out … just sayin … “

Amanda Joy Martin had a more practical response—Denis should get a job. “Tell him to walk over to labor ready or working solutions” she posted.