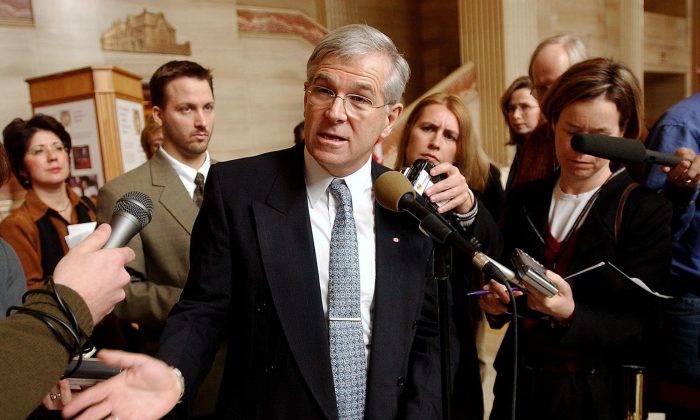 Peter Dudding, then-executive director of the Child Welfare League of Canada, expresses disappointment at the Supreme Court decision to uphold the so-called spanking law in Ottawa on Jan. 30, 2004. The Liberal government has committed to implementing all of the Truth and Reconciliation Commission’s recommendations, one of which is related to repealing the spanking law. (CP Photo/Simon Hayter)
Canada

OTTAWA—Repealing a provision of the Criminal Code that shields parents from facing assault charges for hitting their children would affect more than just First Nations communities, legal experts say.

It would also affect many immigrant and minority parents caught in a legal haze when it comes to child-rearing.

Section 43 of the Criminal Code gives parents and teachers a legal defence when they physically discipline children, most often seen as legalizing spanking. Removing the section was one of the 94 recommendations from the Truth and Reconciliation Commission that examined the legacy of Canada’s residential schools, including rampant abuse.

The Liberal government has committed to implementing all of the recommendations.

Defining what crosses the line between spanking and abuse is not always easy and has raised critiques for years that Parliament should review the provision and either rewrite it, or do away with it.

“Should Parliament address this issue? Absolutely. Should it have a simple blanket repeal that could expose parents in many situations to criminal prosecutions for very minor touching, or conduct that is not clearly proven to be harmful? I would say no, but that’s not to say that we don’t need action in this area,” said Nick Bala, a law professor from Queen’s University in Kingston, Ont.

Spanking is accepted parenting in some cultural and immigrant groups, many of whom are already disproportionately targeted in criminal proceedings.

Spanking is accepted parenting in some cultural and immigrant groups, many of whom are already disproportionately targeted in criminal proceedings. Bala said parents from those groups, as well as aboriginal parents, may find their actions criminalized.

Does that mean repealing the law would see parents face criminal charges for restraining or even spanking their children? It’s unlikely, said Mona Pare, an associate professor of law at the University of Ottawa, pointing to common law defences that allow parents to defend spanking and a legal principle that leads Crown attorneys not to prosecute what they see as a trivial offence.

Section 43 has been criticized for years as condoning child abuse, while also being criticized for being vague about when spanking crosses the line. The Supreme Court of Canada in a 2004 ruling said spanking was reasonable, but set limits: the child had to be between the ages of two and 12, parents couldn’t hit a child in the head, and parents can’t use a weapon like a shoe, slipper, ruler, or paddle.

The Canadian Bar Association and the Canadian Medical Association Journal have lobbied for its repeal, but private member’s bills to remove it from the Criminal Code have repeatedly failed to pass the Senate and House of Commons.

Christian Girouard, a spokesman for Justice Minister Jody Wilson-Raybould, said the government was committed to implementing the commission’s recommendations, but said the government wouldn’t “speculate on potential legislative or policy approaches to address” the spanking law.