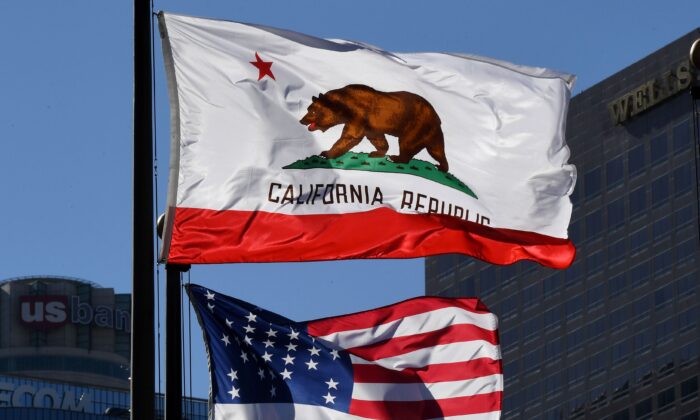 The California State flag flies beside a sign for its sister city Split outside City Hall, in Los Angeles, California on January 27, 2017. A campaign by Californians to secede from the rest of the country over Donald Trump's election is gaining steam with suporters given the green light to start collecting signatures for the measure to be put to a vote. / AFP / Mark RALSTON (Photo credit should read MARK RALSTON/AFP via Getty Images)
Southern California

“I am trying to imagine under what novel features despotism may appear in the world,” Alexis de Tocqueville wrote in his immortal “Democracy in America.” If he could return to our country nearly 200 years later and come to California, he wouldn’t need to stretch his imagination.

Because democracy in California is being obliterated by Proposition 14, which in 2010 was pushed onto the ballot by then Gov. Arnold Schwarzenegger and voter approved. It was the Parthian shot of the many disasters during his misbegotten seven years in office.

Called the Top-Two Primaries Amendment, it immediately almost wiped out the state’s third parties. It set up the current system, under which anyone of any party or no party, runs in a single Jungle Primary. Then the top two winners face off in the general election.

In recent years, Prop. 14 has begun eroding the Republican Party, albeit not the only reason for the GOP’s troubles. In 2018, both candidates for the U.S. Senate were Democrats, incumbent Dianne Feinstein and challenger Kevin de Leon, the former Senate majority leader. In 2016, it was another two Democrats, Rep. Loretta Sanchez vs. incumbent Sen. Kamala Harris, now the vice president.

The political differences among all four of these Democrats are close to nil. Meaning not only Republicans, but third-party folks were frozen out of the process.

And let’s remember third parties are a crucial piece of democracy in America. From Huey Long in the 1930s, to Ross Perot’s 1992 and 1996 runs, to Gov. Jesse Ventura’s 1998 victory for Minnesota governor, third parties have challenged the status quo and provided crucial ideas for reform.

A February 2010 article of mine coming four months before the June election asked the question, “Will Prop. 14 kill third parties?” I quoted Richard Winger, a lifelong member of the Libertarian Party and the state’s top expert on third parties. He provided some of the best arguments against Prop. 14.

I just talked to him again about the situation in 2021.

“California third parties are worse off than ever,” he told me. “There is no third-party member who has been able to be on the November ballot for Congress or partisan state office, except those who ran in races in which one of the two major parties didn’t run anyone. That is true for all elections, 2012 to the present in California. Prop. 14 gives Californians more limited choices than any other place in the world that has free elections.  We are the only place where, by law, there can be only two choices in the election itself.  Even Washington state lets people cast a write-in vote, but not us.”

On the U.S. Senate elections mentioned above, he said, “Prop. 14 does push us toward a one-party system. Having only two Democrats in the last two U.S. Senate races inhibits dialogue.  Even if Republicans couldn’t win either of those two races, at least having Republican candidates for U.S. Senate in the general election would have amplified political debate.”

He also thinks the Sept. 14 recall vote is fallout from Prop. 14. “It is so frustrating to Republicans that there are dozens of U.S. House and state legislative races with no Republican in the general election,” he said. “That contributes to bad feelings and anger.”

It used to be third parties automatically stayed on the ballot if they garnered 2 percent or more in a statewide race in the general election. Otherwise, they had to gather petitions every election just to be listed.

Prop. 14 made that a high threshold to meet. Fortunately, Winger said, “The Legislature did take pity on California’s minor parties.” The 2 percent threshold was extended to the primary vote part of the process. “Separate from all that, the parties had always also stayed on the ballot if they had a certain voter registration, and the Legislature lowered that somewhat, from 1 percent of the last gubernatorial vote, to .33 percent of the total number of registered voters.

“So Peace & Freedom, Libertarian, Green and American Independent are still on. They all have enough registrations and generally they can get 2 percent in the primary for a less important statewide office such as Insurance Commissioner.”

When will Prop. 14 finally be repealed? When will we again enjoy democracy in California?

“I have been astounded for years that the mainstream press of California seems to think our current system is normal and OK,” he said. “It is a scandal. But we probably won’t get rid of it until a random event hurts the Democratic Party for a major office. In 2024, with Dianne Feinstein not running for re-election, I dream of a scenario in which only two popular Republicans run, but eight or nine popular big-name Democrats run, and the two Republicans come in first and second in the primary and leave no Democrat on the November ballot for U.S. Senate and no write-in space.”