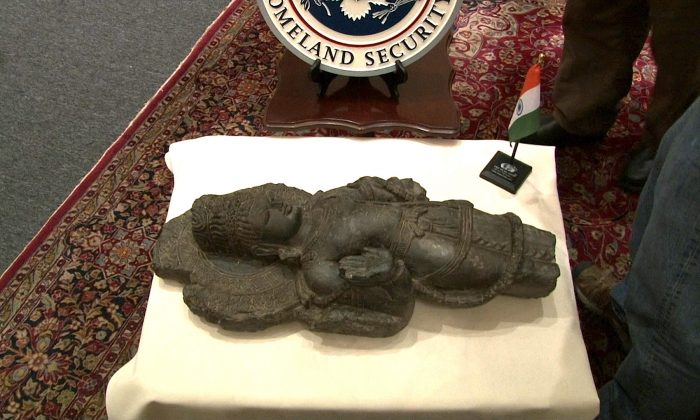 A Boddhisatva statue from the 11th or 12th centuries at the Indian Consulate, New York, Jan. 14, 2014. The statue was repatriated to India from the United States. (Seth Hirsch)
New York

NEW YORK—U.S. and Indian officials denied that the repatriation of three artifacts back to India was timed to make amends between the two sparring nations.

Almost a month after an Indian diplomat was arrested and strip-searched in New York, the United States held a ceremony to send back three religious statues, estimated to be worth over $1.5 million.

The ceremony took place at the Indian Consulate Monday. The Consul General of India spoke of the strengthening of U.S.–India relations and quoted President Barack Obama as saying, “The relationship between India and the United States of America is one that is a defining relationship for the 21st century.”

“What I see from this is that our relationship has bloomed,” said Consul General Dnyaneshwar M. Mulay. “Our relationship is being further strengthened.”

When asked why it had taken the United States so long to send them back, James Dinkins, executive associate director of Homeland Security Investigations (HSI) said a long legal process was involved.

“We first had to establish the true authenticity and provenance of the items,” said Dinkins. “We had to go through a forfeiture process … so that we actually become the rightful owner of them in the United States, so then we can turn them over.”

When asked if this process usually took this many years he replied, “Yes it can. Sometimes people can abandon the property, but we need to also make sure that there’s no innocent owners out there.”

If the United States was waiting for a rainy day to repatriate the items to India, it was exactly that, both meteorologically speaking and politically.

On Dec. 12, 2013, Devyani Khobragade, formerly India’s deputy consul general to the United States, a position with limited immunity, was charged with visa fraud and lying to U.S. officials.

That same day, she was arrested, strip-searched, and placed in a holding cell in a New York federal courthouse. The arresting authority claimed it was a routine procedure done to protect prisoners from themselves and others, but India saw it as a diplomatic snub and a cultural insult.

Khobragade was later released on $250,000 bail, but still faced charges of visa fraud and underpaying and overworking her housekeeper, who ran away in June 2013.

India transferred her to the U.N., which changed her visa so that she would be granted immunity. She is now back in India and must remain out of the United States or face charges in U.S. courts.

“I can tell you this has been on my calendar for an event to happen for quite some time now,” he said.

He did not specify how long “quite some time” was.