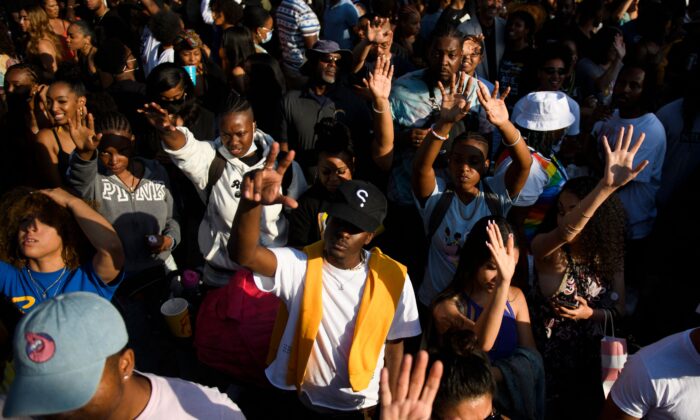 In this file photo, people attend the Leimert Park Rising Juneteenth celebration to mark the end of slavery, in the Leimert Park neighborhood of Los Angeles on June 19, 2021. (Patrick T. Fallon/AFP via Getty Images)
Viewpoints

As America grows more diverse—and California most diverse of all—the last thing needed is government programs pushing racial division. But that’s just what a recommendation released this week by the California task force on slavery reparations would do. Voting 5-4, it recommended reparations for black Californians, but only for those who can prove direct descent from slaves in the American states.

The first big problem is the state of California never had slavery. And it fought on the Union side in the Civil War.

Next is the division immediately introduced between reparations advocates. Said civil rights lawyer Lisa Holder, “The system that folks are advocating for here, where we splice things up, where only one small slice benefits, will not abate the harms of racism.”

The main alternative, basing reparations on race per se instead of lineage, itself introduces major problems. DNA tests would be needed. But then, would reparations be based on the percentage of one’s ancestry originating in sub-Saharan Africa? But what about recent immigrants from Africa, who were not forced to come here on the horrible slave ships, but chose to come on jet airliners to enjoy America’s bounteous opportunities for immigrants?

Then there’s the big problem of where the reparations money is supposed to come from. Often cited is the $20,000 given in 1988 to the Japanese-Americans who had been interned in relocation camps during War II. The law was signed by President Ronald Reagan. But those were direct victims, not the descendants of victims.

Where’s that money supposed to come from? President Biden’s proposed budget for fiscal year 2023, which starts on Oct. 1, runs up to $5.7 trillion. The reparations amount of $1.88 trillion would increase that by a third, to $7.58 trillion.

Well, I suppose with the trillions extra spent the past two years to fight the COVID-19 recession and for Biden’s infrastructure bill, $1.88 trillion isn’t that much. But as 1960s Sen. Everett Dirksen might say, a trillion here and a trillion there, and soon you’re talking real money.

The earlier trillions goosed the economy so much, we now suffer 10 percent inflation. Which does not seem to be ending. Which means the reparations amount would have to be adjusted upward for every year it’s delayed.

And black people, of course, are hit by inflation just as much as everybody. So the reparations program would backfire and make matters worse for them.

But there’s another problem. Just talking about reparations this way deflects attention from real reforms that could help the black community. The first is education reform in California. The “achievement gap” in black test scores—also to a lesser extent happening to Latino students—to a great extent is because black kids get stuck in the worst schools with the worst teachers.

But real reform is continually stymied by the teachers’ unions, the most powerful political force in the state. They refuse, for example, to allow merit pay for teachers, which would reward with higher pay the best teachers going into black schools and giving the students the best education imaginable.

The unions also fight viciously against any school-choice initiatives and will do so again this November in California. School choice would allow parents to take the money spent on a particular student, currently $20,000 according to Gov. Gavin Newsom’s Jan. 10 budget proposal, and spend it on a charter, private, or parochial school. True competition would result, raising the quality of schooling for black scholars—and the scholars of all races.

Finally, the bill establishing the reparations task force was sponsored last year by Assemblywoman Shirley Weber, now California’s secretary of state. Cynically dealing with the matter, and the divisions within his own Democratic Party, Gov. Gavin Newsom signed the bill into law. The action could help him in a potential presidential run during the Democratic Primaries. But it would hurt him in a general election in such swing states as Florida, Michigan, and Pennsylvania, where political correctness is less popular.

As I have written before, Newsom seems to not understand what’s going on in that big country out there to the east of California. Americans of all types have had enough of the division and the rancor, the political correctness and the Critical Race Theory, and want real solutions to the immense problems facing this country.