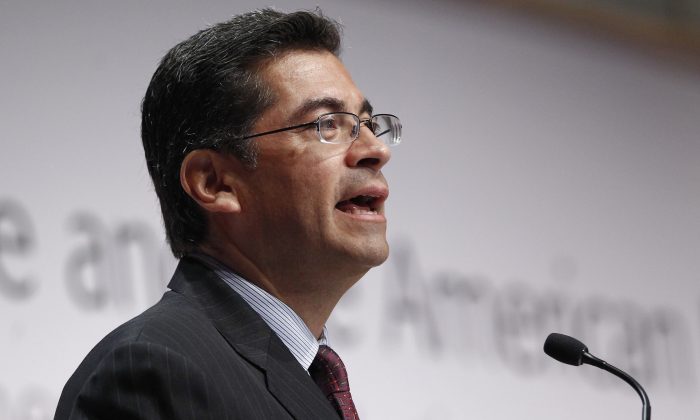 Becerra, 58, a rising star in the party who served as a high-profile Latino surrogate for Democratic presidential nominee Hillary Clinton’s campaign this year. He was widely discussed as a potential cabinet appointee if Clinton won.

But with the election of Trump and a Republican sweep of both houses of Congress, his 24-year tenure in the House is no longer as appealing. In the attorney general’s position, Becerra could serve through 2018 then seek another eight years after that.

“Washington, DC is now red territory, so if he wants to have an impact on policy, California’s the place to do it,” Kousser said.

The Democratic governor noted Becerra’s service in Congress, in the state Legislature and as a deputy attorney general. The nomination is subject to confirmation by the state Assembly and Senate. It will be officially submitted after Harris resigns.

“I’m confident he will be a champion for all Californians and help our state aggressively combat climate change,” the Democratic governor said in a statement.

If confirmed, Becerra will be the state’s chief law enforcement officer and will oversee the legal defenses of California’s aggressive efforts to control greenhouse gases. He’ll also preside over likely skirmishes between the state’s liberal lawmakers and the administration of Republican President-elect Donald Trump.

Becerra said in a statement that Brown had presented him with an opportunity he can’t refuse.

“As a former deputy attorney general, I relished the chance to be our state’s chief law enforcement officer to protect consumers, advance criminal justice reform and, of course, keep our families safe,” Becerra said. He noted that he traveled to 15 states as he campaigned for congressional candidates in battleground districts this year.

“But California right now is ahead of the country when it comes to clean energy, commonsense treatment of immigrants, real health security and so much more,” he said.

As Democratic caucus chairman, Becerra is the highest ranking Latino in Congress, where he has served since 1992. Brown’s announcement noted that he was the first in his family to graduate from college, obtaining both bachelor of arts and law degrees from Stanford University.

Kousser noted that going to battle in the courtroom with the Trump administration over climate change and immigration will raise his profile both in California and nationally, which would help him if he wants to run for governor in 2018 or to replace Sen. Dianne Feinstein, D-Calif., when she decides to retire.

Becerra’s replacement in his solidly Democratic district in Los Angeles would be picked via special election. His expected departure immediately set off speculation about his potential replacement. Former Assembly Speaker John Perez quickly announced he would seek the seat representing areas including downtown, Boyle Heights, Chinatown and Highland Park.

Becerra is likely to face easy confirmation in the Democratically controlled Legislature. De Leon and Assembly Speaker Anthony Rendon, D-Paramount, both released effusive statements praising Becerra as someone who will stand up to Washington and defend the rights of Californians.

“The governor has done a lot of things with regards to criminal justice policy that I suspect he wants to have kept in place,” Rushford said. “So I would be surprised if you were going to get an attorney general who was going to look at his policies unfavorably.”

Becerra was a deputy attorney general for three years before he began his political career in 1990. The experience should help ensure a smooth transition, said Steve Wagstaffe, San Mateo County’s top prosecutor and president of the California District Attorneys Association.

“I look forward to meeting him soon and establishing a relationship with him and the district attorneys,” Wagstaffe said in a statement.