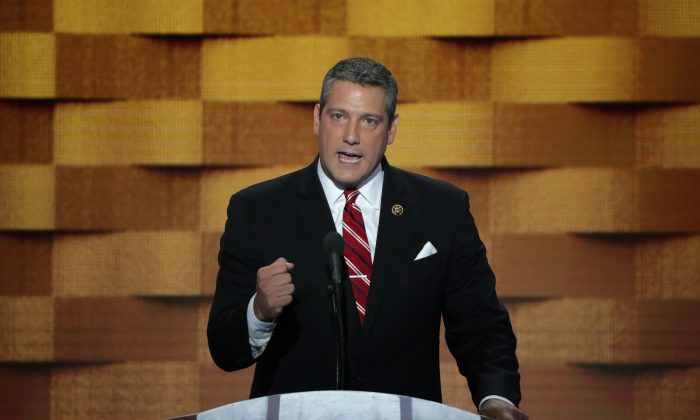 Rep. Tim Ryan declared April 4 on ABC’s “The View” that he’s the presidential candidate who can bring back into the Democratic column his home of Ohio and the other Rust Belt states that were key to President Donald Trump’s unexpected 2016 victory.

“I can win western Pennsylvania, I can win Ohio, and I can win Michigan. That means Donald Trump is going back to Mar-a-Lago full-time,” Ryan said, in response to a question from The View regular Meghan McCain.

He is the 17th Democrat either officially to announce or to make clear a serious interest in running for the 2020 Democratic presidential nomination.

Ryan has been in Congress since 2003, representing Ohio’s 13th congressional district (it was known as the 17th prior to 2013). The 13th is virtually a classic Rust Belt setting, including as it does, within its boundaries in northeast Ohio, the cities of Youngstown and Akron, where lost manufacturing jobs have been commonplace for decades.

Taking on the biggest names in American politics is nothing new for the relatively unknown Ohio Democrat. He unsuccessfully challenged Nancy Pelosi for the position of House minority leader after Trump upset former Secretary of State Hillary Clinton.

Ryan’s appearance on the ABC show came soon after his presidential candidacy’s website went live, making official his announcement that he wants to be the Democrat who Trump faces in 2020.

“Like so many in America’s heartland, I come from a long line of factory workers who helped build our nation into a powerhouse of innovation,” Ryan said on his website.

“But over the last 20 years, failed leadership and broken promises have destroyed the middle-class, forcing our economy into crisis and pushing the American Dream out of reach.

“When our local GM factory was shut down last Thanksgiving, I got a call from my daughter who was consoling her friend, whose father was an auto worker and was just laid off. My daughter said to me, with tears in her voice, ‘You have to do something.’ That’s why I am running for president. It’s time to do something.”

General Motors announced in November last year the closing of its Lordstown, Ohio, assembly plant, which produced its last vehicle on March 6. At least 4,500 jobs were lost as a result.

Ryan is positioning himself as a classic blue-collar union liberal Democrat, who is also a free enterprise champion and somebody who wants to get beyond the country’s intensely partisan divisions.

“The country is so divided right now that we can’t get a plan together,” Ryan said on ABC. “The first thing we have to do is unify, but there are so many industries out there that are growing; wind and solar are growing at 25 to 30 percent a year.

Challenged by panelist Abby Huntsman that he sounds like Trump when he talks about reviving the Rust Belt, Ryan said the president is a product of “the old school politics, he wants to go back to the old economy, old steel mills and old coal mines.”

By contrast, Ryan claimed, he’s “talking about where are our kids going to work and how do we come together, the best of government, the best of the workforce, and the best of free enterprise system, so that we are dominating the electric vehicle market and at the end, cut the workers in on the deal.”

But being the voice of the Rust Belt against Trump may not be enough to give Ryan an edge, especially as long as former Vice President Joe Biden remains a potential candidate, according to Democratic strategist David Burstein.

“He’s going to be the spokesman for the Rust Belt and working-class Americans, and not Joe Biden? I don’t know about that,” Burstein asked in an interview with The Epoch Times.

“I just don’t know if there is room for a young and an old Rust Belt working-class person,” Burstein said.

Pointing to the large field of Democratic aspirants, Burstein said he doesn’t know what else Ryan “has to say other than ‘they should pay attention to rural America.”

South Bend, Indiana, Mayor Pete Buttigieg “is speaking much more clearly and more effectively for them” than Ryan, Burstein claimed.

Ryan has the image of a centrist but described himself April 4 as “the progressive who knows how to talk to working-class people.” He supports Medicare for All and legalizing marijuana.