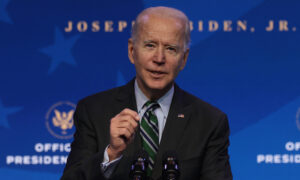 Former President Donald Trump announced the creation of the 1776 Commission on Sept. 17, 2020, signing an executive order to establish it on Nov. 2, to support what he called “patriotic education.”

On President Joe Biden’s first day in office, he called off the commission.

“Trump was doing it as a counter to the 1619 Project, which really started two years ago,” said Budd during CPAC 2021. “[It] was putting slavery at the center of our national narrative. That’s part of our narrative, but it’s not the whole narrative. So we launched the 1776 Commission to talk about our founding principles, and what led to a nation of laws, and not have a nation of power by men.”

Some media outlets and the Biden administration have claimed that the 1776 Commission is racist.

Budd disagreed with those claims, saying that the United States has always been in a march toward freedom.

He mentioned the 1863 Emancipation Proclamation and the later 1868 Civil Rights movement, stating that the media’s claims in this regard are part of a “narrative to distract people.”

“We’re always on a march towards more freedom. But it’s regressing now, they call it progressivism, but it’s truly ‘regressivism,’ we’re going backwards,” he said.

The congressman said that progressives have an agenda to obtain more power.

“The devil always accuses of his own sins. And that’s what we’re seeing right now. From the left, when they say racism, it’s actually a power grab from them. That leads to more elitism, which is more racism.”

The commission was tasked with producing a report on “the core principles of the American founding” and advising the president and the U.S. Semiquincentennial Commission on plans to celebrate the 250th anniversary of the United States. The order also called for the creation of a “Presidential 1776 Award” to recognize students’ knowledge about the founding of America.

Budd explained that the idea behind the 1776 Commission is that all people are endowed with equal value from birth, and that from 1776 onward these principles have been recognized.

“This is about power of the government to tell you what you should do, who you should be. And I just think that’s completely wrong,” he said, referring to the alternate take on American history, the 1619 Project.