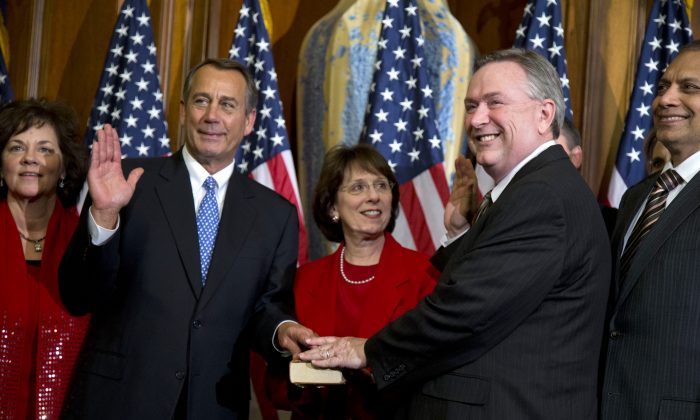 Rep. Steve Stockman of Texas, who is pursuing a run for senate, walked out of President Barack Obama’s State of the Union address, and says he is now considering trying to impeach Obama.

Stockman said that he walked out of the speech because of what he believes was infringement on the Constitution.

“I could not bear to watch as he continued to cross the clearly-defined boundaries of the Constitutional separation of powers,” Stockman said a statement. “Needless to say, I am deeply disappointed in the tone and content of tonight’s address.”

Stockman said that Obama was promising to “break his oath of office and begin enacting his own brand of law through executive decree.”

“This is a wholesale violation of his oath of office and a disqualifying offense,” the congressman added.

In a blog post update, Stockman said that he’s considering filing Articles of Impeachment against Obama.

“Obama defiantly vowed not only to radically expand the reach of government from cradle to grave, but to smash the Constitution’s restrictions on government power while doing it,” Stockman said.

“His goal is to eliminate our constitutional republic.”

He noted that last year he said that it would be a last resort to try to impeach Obama but said that “we’re running out of options.

He asked people to join him since he needs hundreds of thousands of supporters in the effort.

Stockman recently had a story written about him missing every vote in Congress since January 9, but told Breitbart News that he was on a trip with four other members of Congress to Egypt, Israel, England, and Russia.

He added that the trip didn’t cause him to miss the votes–he missed them because he was fundraising for his senate campaign.

“I missed votes because I don’t have a zillion dollars like [incumbent Jon] Cornyn and have [to] campaign,” Stockman told Breitbart. “But I wasn’t missing. The Dallas Morning News covered my talk and Cornyn’s tracker was there. Both the press and Cornyn knew where I was.”