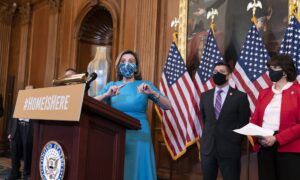 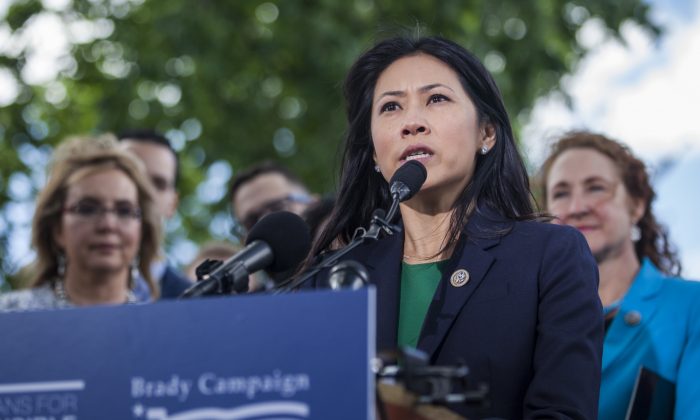 Rep. Stephanie Murphy (D-Fla.) speaks during a press conference on Capitol Hill in Washington on May 3, 2017. (Zach Gibson/Getty Images)
Democrats

Rep. Stephanie Murphy (D-Fla.) is opting to run for another term in the House of Representatives, avoiding what she said would be a “bruising primary” battle for one of Florida’s two U.S. Senate seats.

Murphy told supporters on May 24 that she’s been traveling across the state since February, listening to Democrats to try to “regroup and re-energize” the state party ahead of the 2022 elections.

“I wouldn’t be considering a run if I didn’t think I’d be a strong nominee. I’ve won every single race I’ve run, including a primary and tough generals in one of the toughest seats in the country,” Murphy said in a video statement.

“But the reality is that Marco Rubio will not be an easy opponent, especially if it’s on the heels of a bruising primary, where Democrats spend millions attacking each other instead of using those millions to build the infrastructure we so desperately need to win here.”

Rep. Val Demings (D-Fla.) has reportedly decided to challenge Rubio. If Murphy was also running, it would set up a tough primary battle even before a Democrat faced the sitting senator.

“I think she’s thinking strategically, that she does not want to get into a large multi-person primary,” Aubrey Jewett, associate professor at the University of Central Florida’s School of Politics, Security, and International Affairs, told The Epoch Times.

In 2018, five strong Democrats duked it out in a primary in the gubernatorial race. Andrew Gillum emerged with under half of the vote and went on to lose to Ron DeSantis, a Republican.

Demings said last week that she was humbled to see messages encouraging her to launch a bid.

“I know the stakes are too high for Republicans to stand in the way of getting things done for Floridians, which is why I’m seriously considering a run for the Senate,” she wrote in a statement.

A Rubio campaign spokesman told The Epoch Times in a recent email that “Democrats are tripping over themselves in a race to the left to find a candidate who will help advance [House Speaker] Nancy Pelosi’s socialist agenda.”

Murphy, 42, was born in Vietnam before her family immigrated to America. She was first elected in 2016, ousting Rep. John Mica (R-Fla.).

Demings, 64, the former police chief of Orlando, also won a congressional race in 2016.

While about a half-dozen Democrats have declared their candidacy for the Senate seat held by Rubio, none rival the name recognition Demings and Murphy hold. The closest is Allen Ellison, who twice launched failed bids for Florida’s 17th Congressional District.

Regardless of who emerges from the Democratic field, it will be hard to beat Rubio, according to Jewett.

“Not impossible, but obviously, it’ll be tough,” he said.

Murphy said she would continue working to help the Democratic Party achieve success in Florida, while indicating she will run again for the lower chamber.

Depending on how redistricting goes, Murphy likely has a better chance of being reelected than winning the Senate race, Jewett said.

“If they do not change her district too much during redistricting, she would have a much better chance of getting reelected there than going through that grueling primary and then following up with the grueling general election after that. Neither of those is guaranteed; no guarantee that you get your House seat back, but political science research shows that 90 percent of incumbents get reelected that choose to run,” he added.