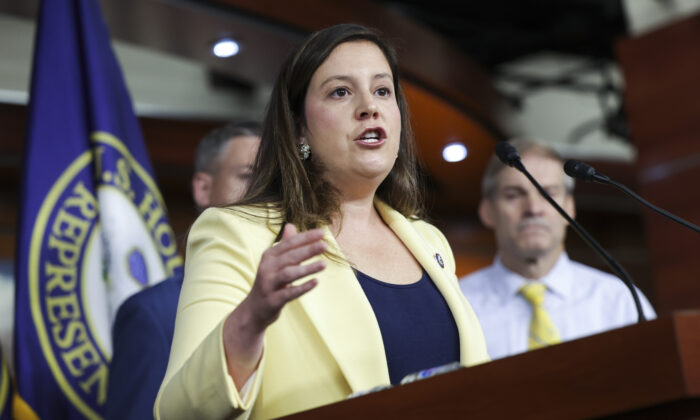 Rep. Elise Stefanik (R-N.Y.) has announced a proposal that would hold the Biden administration accountable for record inflation that has climbed to a 41-year-high.

The bill, titled REIN IN Inflation Act, would require the administration to assess the inflationary effect of any executive order before implementing it. The Council of Economic Advisors and the Office of Management and Budget, the White House agencies charged with advising the president on economic-related policies and administering the federal budget, respectively, would need to prepare a report estimating the inflationary effects of any action that costs $1 billion or more.

The legislation comes as the U.S. inflation rate surged to 9.1 percent in June compared to a year earlier. The figure marks the highest annual increase since November 1981, surpassing the market estimate of 8.8 percent, and is half a percentage point higher than May’s annual rate.

“Today, every hardworking family is forced to pay more for almost everything due to Joe Biden’s failed economic policies,” Stefanik told The Epoch Times. “Instead of reversing course, Joe Biden and his administration have doubled down on their far-left tax and spend agenda and continue to exacerbate this inflation crisis.”

The bill, she added, will “ensure this administration takes into account the harmful impact of their policies that worsen this inflation crisis and drive up prices of goods, gas, and groceries.”

“As hardworking families in New York’s 21st District and across the nation are forced to pay the price for Democrats’ out-of-control spending, I am working to hold this administration accountable and rein in the policies that fuel devastating inflation, which is a tax on every family,” she said.

The data published by the Bureau of Labor Statistics on July 13 show that nearly every food item became more expensive during the 12-month period ending in June, with egg prices spiking 33.1 percent and coffee by 15.8 percent. Fuel oil prices went up by 98.5 percent.

Biden on June 13 described the inflation number as “unacceptably high” but insisted that it is “out-of-date” because the prices of some commodities, such as fuel, have dropped since the data was collected for the report.

He blamed the inflation on the COVID-19 pandemic and Russia’s “unconscionable aggression,” saying he will continue to release oil from the Strategic Petroleum Reserve while increasing oil production as part of the solution.

In a press conference before the inflation report’s release, White House press secretary Karine Jean-Pierre similarly played down the significance of the data.

“We expect the backward-looking inflation data to be highly elevated, mainly because gas prices were so high in June,” she said. Both Jean-Pierre and Biden on July 13 reiterated criticism of oil and gas companies, accusing them of passing costs to consumers at the pump.