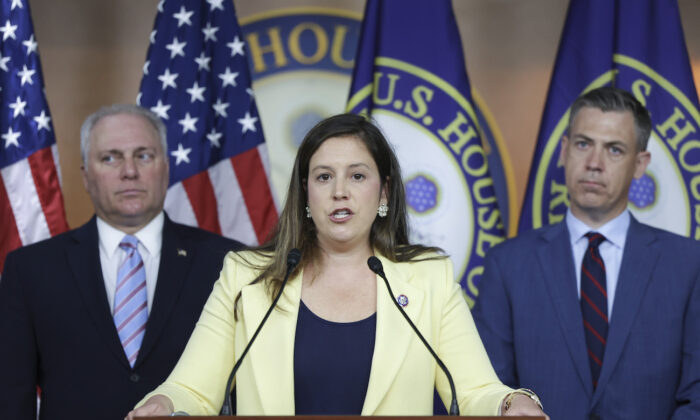 Mary Hong
Mary Hong has contributed to The Epoch Times since 2020. She has reported on Chinese human rights issues and politics.
View profile
Follow
and Eva Fu

“Food security is national security, and I am proud to stand up against our foreign adversaries as they attempt to exploit any potential vulnerability and assert control over our agriculture industry,” Stefanik said in a press release on July 1.

“The United States cannot allow malign ownership bids of American assets by China, Russia, Iran, and North Korea to undermine the efforts of our farmers, whose hard work feeds and fuels our communities,” she said. “Especially as we witness the devastating impact of a supply chain crisis, the United States cannot cede any ownership of our food supply to those who do not share our security interests.”

The proposed legislation included a provision that would make the Secretary of Agriculture a member of the U.S. Committee on Foreign Investment. It would also require the secretary to submit a report every 180 days reviewing the risks that foreign purchases of agricultural companies may pose to the U.S. agricultural sector.

“Adversarial nations, like China, continue to threaten our homeland, using tactics like buying American agriculture companies and stealing agriculture research to undermine our economy,” Rep. Rick Crawford (R-Ark.), who co-introduced the bill, said in a statement.

“Washington must realize that agriculture security in national security, and we have a duty to protect our food supply and those who produce it.”

Experts have previously told The Epoch Times that Chinese farmland investments in the United States could allow the regime to stage espionage campaigns against America.

Last November, China’s Fufeng Group began negotiations to purchase of 370 acres of land in Grand Forks, North Dakota as the location for a massive new corn-milling plant, which has been described as “the largest single private capital investment in the region’s history,” according to the Grand Forks Region Economic Development Corporation.

But according to Ross Kennedy, the founder of Fortis Analysis, the Chinese regime has become “very involved in major infrastructure projects” around the world in recent years, and some of their chosen locations have been “regions of strategic and national security importance.”

“This Chinese company may be coming into Grand Forks under the guise of setting up a food nutrient and additive manufacturing facility, but could be setting up the ability to passively and actively monitor one of the nation’s most valuable assets,” Kennedy previously told The Epoch Times.