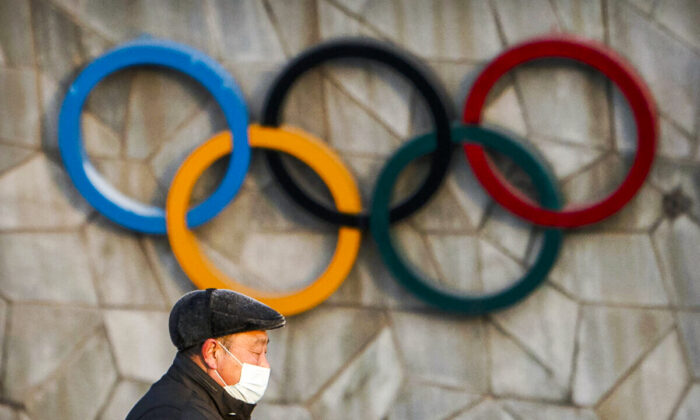 A man walks past the Olympic rings on the exterior of a venue for the upcoming 2022 Winter Olympics in Beijing on Feb. 2, 2021. (Mark Schiefelbein/AP Photo)
Southern California

Rep. Michelle Steel (R-Calif.) is urging corporate sponsors of the 2022 Olympic Games in Beijing to use their advertisements to showcase the Chinese Communist Party’s (CCP) massive human rights abuses.

Steel wrote a letter to 17 different U.S. companies on Dec. 6, urging them to use their multimillion-dollar advertising budgets that will reach billions of people to raise awareness on the atrocities being performed on religious groups inside China in an effort to pressure the CCP into ending its human rights violations.

The letter comes on the same day as the Biden administration announced a diplomatic boycott of the Olympics after citing “ongoing genocide,” which Steel hailed as the right decision.

“You hear these awful stories [inside China,] and these corporate sponsors have been so quiet,” Steel told The Epoch Times. “This is a great chance where they can at least expose what’s going on regarding human rights in China, because we’ve been hearing so much. This is just a great chance to let the world know that we really have to expose what China is doing.”

The CCP has oppressed many spiritual groups including Buddhists, Christians, and Uyghur Muslims, in which an estimated 1.8 million Uyghurs have been detained in internment camps in China’s Xinjiang region, where they are subjected to forced labor, torture, and political indoctrination.

Additionally, the CCP continues to persecute practitioners of Falun Gong, also known as Falun Dafa, an ancient Chinese spiritual practice consisting of slow-moving meditation exercises and teachings based on the principles of truthfulness, compassion, and tolerance.

By 1999, an estimated 70 million to 100 million people were practicing Falun Gong. The leadership of the CCP, feeling threatened by Falun Gong’s popularity, launched a systematic elimination campaign in July 1999. Since then, millions have been detained inside prisons, labor camps, and other facilities, with hundreds of thousands tortured while incarcerated, according to the Falun Dafa Information Center.

In her letter, Steel also highlighted how many of the same companies spoke out last year regarding the political and social protests—with Coca-Cola speaking out loudly against voting laws passed in Georgia—but failing to stand against the CCP’s human rights abuses.

“Visa said, ‘Change starts here’ and highlighted their focus on ‘global acceptance.’ Airbnb condemned ‘racism, bigotry and hate.’ But where are your statements against the human rights abuses happening right now in China? How can we support sending our athletes—the best of the best, who have worked so hard for these moments—to a country with a backdrop of abuse and violence?” the letter reads in part.

So far, the congresswoman has not heard back from any of the 17 companies, which she said was very disappointing.

“They don’t have the guts to stand strong against human rights abuses. They just care about how much money they are making,” Steel said.

“I urge you to use your global platform to stand up to Communist China and support the values of human rights,” she wrote in the letter. “I understand this is not easy, but you have a global platform to take a stand for the voiceless. We must all come together to hold the CCP accountable and protect the freedoms of religion and speech for all.”

Steel, who is a member of the Congressional-Executive Commission on China, sent a letter in March with Sen. Ted Cruz (R-Texas) to the International Olympic Committee insisting that the 2022 Olympics be moved out of Beijing due to the same human rights violations.