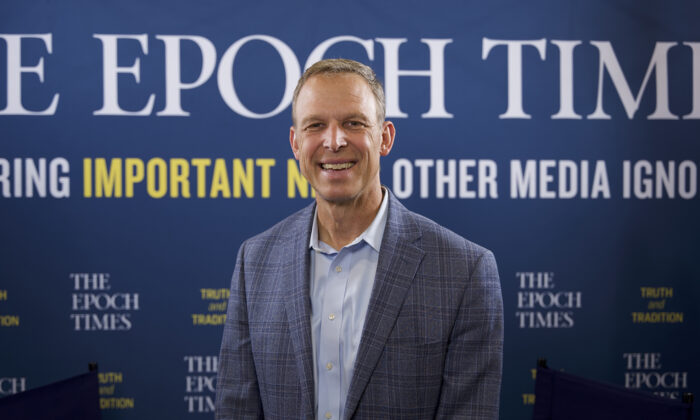 “We need to see the CCP for what it is, to quit regarding them as a strategic competitor,” says Rep. Scott Perry (R-Pa.), a member of the House Foreign Affairs Committee. “They see America as their enemy, and treat us as such. It’s time we started responding to that stance.”

In a recent episode of EpochTV’s “American Thought Leaders,” host Jan Jekielek sat down with Perry to discuss House Speaker Nancy Pelosi’s recent trip to Taiwan, the Chinese threats to shoot down her plane, how Beijing is exploiting America’s weaknesses, and what holding the Chinese regime to account would actually look like.

Jan Jekielek: The speaker of the House, Nancy Pelosi, met with officials in Taiwan, which brought strong reactions from the Chinese regime. What’s your take?

Rep. Scott Perry: I’m happy that America is representing itself in Taiwan and meeting with the leadership. It’s important that we let the rest of the world know that we stand shoulder to shoulder with free people, people who reject totalitarian leadership around the world.

Mr. Jekielek: Chinese state media suggested that the speaker’s plane might be shot down. What do you make of this?

Mr. Perry: It’s a wake-up call to anybody thinking the status quo is permanent, with the United States being the global leader. Americans should recognize that the Chinese Communist Party [CCP] made the calculation that there was no downside to threatening to shoot down the speaker of the House. Essentially, it was an act of war.

We need to see the CCP for what it is, to quit regarding them as a strategic competitor. They see America as their enemy and treat us as such. It’s time we started responding to that stance.

Mr. Jekielek: You’ve talked about “the flaccid response” to China’s threats of war in general.

Mr. Perry: Our response to China has been mixed. Even in the administration, we see different viewpoints that are confusing to Americans and that our adversaries take advantage of, especially the Chinese. We don’t offer support for Taiwan’s independence, yet we send our speaker of the House there. We disagree with the CCP’s goals, but we don’t do anything meaningful regarding the theft of intellectual property, the disregard for international trade agreements, and the disregard for U.S. law. We ignore a host of things, from propaganda to spy operations.

We don’t want a war with China, but we have to acknowledge that our policy and rhetoric have failed. We have to understand our circumstances as well. We no longer have the largest navy on the planet. We can no longer project power against the CCP.

Mr. Jekielek: How do you safely change the status quo?

Mr. Perry: In any relationship, if you accept poor treatment from people, they’re going to keep giving you poor treatment. If you then decide, “I’m done with this,” but you’ve always allowed them to treat you poorly, there’s going to be a reaction. You have to recognize and understand that.

We need to take some small but definitive steps to say: “We don’t appreciate the way you’ve been treating us. So, we’re moving in a different direction now.” Then we’ll see how they respond. It’s important we do that as soon as possible, because as time goes on, we’ll have fewer and fewer options.

We need a coherent strategy. We’ve all got to be on the same page on this thing. Unfortunately, there’s been a lack of leadership at the top during this administration, but also to a certain extent in my own party. President Trump was taking the correct steps, but people within his administration were undermining him. That cannot be allowed to happen.

Mr. Jekielek: What congressional bills regarding China would actually be beneficial to America?

Mr. Perry: There is a whole host of bills, from moderate to in-your-face. For instance, we could classify the CCP as a transnational criminal organization. That might seem extreme to people. But if you look at the evidence, everything they do qualifies them for that classification. So, how about this? We just don’t allow the Thrift Savings Plan. Every service member in uniform is required to pay into these plans that invest in unaudited Chinese companies, and in many cases, these plans are funding the very enemy our service members are training to fight.

There’s a lot of money floating around. I understand there’s a lot at stake, but the sovereignty of our country and freedom are at stake, too. We need to ascribe a value to that freedom so that people can understand what is truly important here.

Mr. Jekielek: Is it money that makes the difference?

Mr. Perry: Absolutely. It’s front and center in some instances. I hate to pick on the NBA, but they certainly deserve criticism. I get that the NBA’s market in China is huge. But while they criticize the United States for its shortcomings, they’re absolutely unwilling to criticize the CCP. Meanwhile, there are concentration camps in East Turkistan, the social credit system, and the lack of freedom now in Hong Kong.

As members of Congress, we need to ask: What are we doing for the citizens in our country? I’m a representative from Pennsylvania. I grew up there, and every town had its own industry. Those jobs, skills, and industries are gone, most of them overseas. We started a course correction during the last administration, but that’s already been wiped out. We’ve got to start again and get both sides on board.

Mr. Jekielek: Let’s look at the solar panel industry in China as an example. It’s subsidized by the government to the point of almost cornering the market, and this isn’t the only industry where this has been done. Do people realize this?

Mr. Perry: People like me scream it from the mountaintops whenever we have the opportunity—85 percent outsourcing of things like battery technology, battery critical components, solar panels, or slave labor-associated products—and you’re playing a part whenever you purchase these things or advocate for this situation. This really hit home with pharmaceuticals, for instance, at a certain point during COVID.

Mr. Perry: We can’t get antibiotics in this country when we’re this dependent on China. That’s one of the reasons we have to be careful how we deal with the Chinese. And look at all these restrictions on what the left calls rare earth minerals. They’re not rare. They’re under our feet here in America, but because of restrictions, we can’t get to them.

Mr. Jekielek: Let’s jump back to this bill that would label the Chinese Communist Party a transnational criminal organization. It would be a huge move politically, but it’s something you’ve been serious about.

Mr. Perry: The Party is acting as a transnational criminal organization to the detriment of our country and our economy. Even if we just had a hearing on the bill, it would send a signal. But we in Congress don’t even discuss the fact that the Chinese Communist Party gets away with all this stuff. We have to influence the behavior of the CCP, but the important part of this conversation is to alert Americans that this is happening. They need to understand the separation between the Chinese people and the Party that oppresses them, and that the CCP wants to steal from us and replace us as a world leader.

And this is happening with the help of Big Tech. They see themselves as global companies founded and operated from the United States of America, but they’re working with the CCP to oppress the Chinese people. Why is that acceptable? Why is the forced organ harvesting of the Falun Gong acceptable? Why isn’t the media covering it? As you know, I make it one of my priorities. But we need the Congress and the president to stand together on this.

Mr. Perry: They can’t imagine this would happen in the 21st century, but every single sign points to it. We have to be careful here because the Chinese Communist Party doesn’t allow these kinds of investigations in their country. But there’s no waiting list for an organ transplant in China, yet in developed nations, there are long waiting lists. Investigations have confirmed, as far as they, can that live organ harvesting happens in China.

Mr. Jekielek: In a very concrete way, what can be done immediately to shift this entire situation?

Mr. Perry: The rhetoric is important. Public actions, like the one by the speaker, are important. Probably the best thing to do is to look at the perils the United States faces in a world where China is the global leader—whether it’s in pharmaceuticals, technology, or finance. We need to identify our challenges, prioritize our solutions, and then get to work on those solutions.