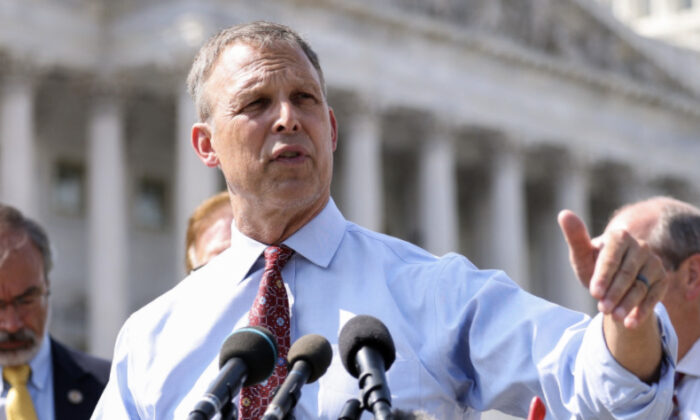 Rep. Scott Perry (R-Pa.), joined by members of the House Freedom Caucus, speaks at a news conference on the infrastructure bill outside the Capitol Building in Washington, on Aug. 23, 2021. (Kevin Dietsch/Getty Images)
FBI Raids Trump Resort

Rep. Scott Perry (R-Pa.), an ally of President Donald Trump, says the Federal Bureau of Investigation (FBI) seized his cellphone a day after it executed a search warrant at Trump’s resort in Mar-a-Lago, Palm Breach.

“This morning, while traveling with my family, three FBI agents visited me and seized my cell phone,” reads a statement from Perry’s office. “They made no attempt to contact my lawyer, who would have made arrangements for them to have my phone if that was their wish.”

“I’m outraged—though not surprised—that the FBI under the direction of [Attorney General] Merrick Garland’s [Department of Justice (DOJ)], would seize the phone of a sitting Member of Congress,” the congressman said in the statement provided to The Epoch Times.

“My phone contains info about my legislative and political activities, and personal/private discussions with my wife, family, constituents, and friends. None of this is the government’s business.”

The seizure comes a day after the FBI raided Trump’s Mar-a-Lago property. It is not immediately clear if the move is related to the raid or the investigations of the Jan. 6 Committee, which has subpoenaed Perry.

“As with President Trump last night, DOJ chose this unnecessary and aggressive action instead of simply contacting my attorneys,” the statement from Perry’s office reads. “These kinds of banana republic tactics should concern every Citizen—especially considering the decision before Congress this week to hire 87,000 new IRS agents to further persecute law-abiding Citizens.”

Trump’s lawyer, Christina Bobb, told The Epoch Times on Tuesday that FBI agents were looking for “what they deemed to be presidential records” and seized documents from Trump’s property.

“We had been very cooperative with them before. And it’s unclear to me why they went to such drastic measures to do this. But they did. And as far as the probable cause goes, they wouldn’t give that to us,” she added.

The search warrant for the raid remains under seal. Trump’s legal team plans to file a request to the U.S. District Court for the Southern District of Florida to unseal the search warrant affidavit. If they are successful, the affidavit would show what probable cause authorities had established before executing the warrant.

“We don’t know what the probable cause is. I don’t think there is a good cause to do such a drastic thing. But they did,” Bobb said.

The National Archive Records Administration (NARA) said in February that Trump’s representatives have been cooperating in transferring presidential records.

“Throughout the course of the last year, NARA obtained the cooperation of Trump representatives to locate Presidential records that had not been transferred to the National Archives at the end of the Trump administration,” the NARA said in a statement.

Trump, who broke the news about the raid on Truth Social late Monday, called the raid “prosecutorial misconduct, the weaponization of the Justice System, and an attack by Radical Left Democrats who desperately don’t want [him] to run for President in 2024, especially based on recent polls,” adding that Democrats “will likewise do anything to stop Republicans and Conservatives in the upcoming Midterm Elections.”

“Nothing like this has ever happened to a President of the United States before,” Trump said.

The Epoch Times has reached out to the Department of Justice and the FBI for comment.