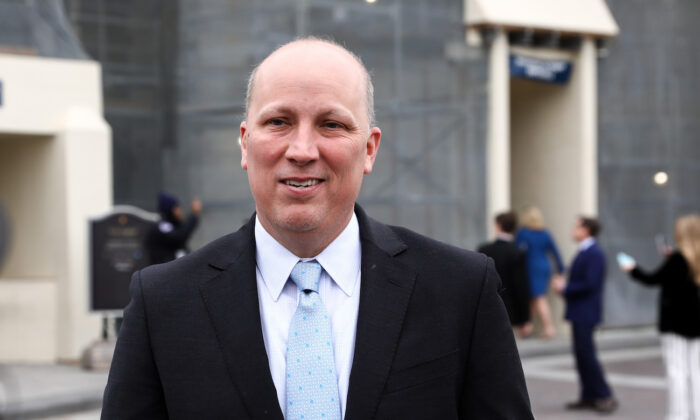 ‘They Are Our Enemies’: Rep. Roy’s Bill Seeks to Block CCP Members From Buying US Land Over National Security

Rep. Chip Roy (R-Texas) says that his proposal to block members of the Chinese Communist Party (CCP) from acquiring land in the United States is necessary to protect U.S. national and economic security.

The legislation (pdf), named the Securing America’s Land from Foreign Interference Act, was introduced on July 9.

Roy told The Epoch Times that the measure would prevent individuals with links to the CCP from exploiting vulnerabilities to the detriment of U.S. national security and interests, through the purchase of public or private land.

“There have been a number of disturbing stories in the recent years … where we’ve seen the land being acquired in the United States of America by Chinese interests … and very obvious ties to the Chinese Communist Party,” he said.

“In general terms, the Chinese Communist Party, not only are they not our friend, they are our enemies and we ought to treat them as such. I don’t believe that we should be allowing the Chinese to be acquiring significant amounts of real estate in the United States to our detriment.”

The legislation follows concerns from lawmakers and experts last year over a proposed Chinese wind farm project in West Texas. Critics said the Chinese project could be used as a cover for espionage and to disrupt the state’s power grid.

The acquisition was reviewed by the Committee on Foreign Investment in the United States, which is chaired by the Treasury Department, and the panel found that the Blue Hills Wind development in southwest Texas’s Val Verde County doesn’t currently pose a national security threat. However, an expert familiar with the project in Texas previously told The Epoch Times that there are a number of potential concerns with regard to Chinese control over the roughly 140,000 acres of land.

The proposed wind farm site is about 30 miles from the U.S.–Mexico border and about 70 miles from Laughlin Air Force Base, the U.S. Air Force’s largest pilot training facility.

Spurred by these concerns, Texas lawmakers earlier this year approved legislation that would ban individuals or companies connected with China, Iran, North Korea, or Russia from entering into contracts related to the state’s critical infrastructure. It was signed into law by Gov. Greg Abbott on June 18 and took effect immediately.

In a release accompanying his legislation, Roy said data from the U.S. Department of Agriculture shows that foreign investors control nearly 30 million acres of U.S. farmland—roughly the size of Ohio. Texas has the second-highest amount of foreign ownership, with 3 million acres under foreign control.

The Republican lawmaker told The Epoch Times that any foreign acquisition of U.S. land, by the CCP in particular, should be a cause for concern, as owners will then be able to control that land and how that land is being used.

“I certainly don’t want to see significant foreign ownership of American interests even from allies, much less the Chinese Communist Party,” Roy said. “Sovereignty is a wonderful thing … and that’s part of why we need to secure our border. That’s part of why we should we need to be not just suspicious of but pretty opposed to significant, if any acquisition of our assets here in this country, by the Chinese and the Chinese Communist Party.”

Roy stressed the importance of maintaining control of the production of American resources “for our own well-being in our own communities.”

The United States must not “rely upon those who have different political regimes, different interests, ones that we cannot control through our republican form of government,” he said.

“There is one United States of America, we fought a war in order to create ourselves, we have fought such wars in order to fend off tyranny. It is my belief that we need to preserve and protect this great country, along with those who are allies who believe what we believe.

“But you know, while the Chi-comms [Chinese communists] are around, murdering the Uyghurs and going around enforcing the ridiculous policies of child extermination and limitations on how many children you can have and other horrors against humanity, forgive me for not wanting to subject Americans to their Chinese Communist Party ways in any form from national security, economic security, or otherwise.”