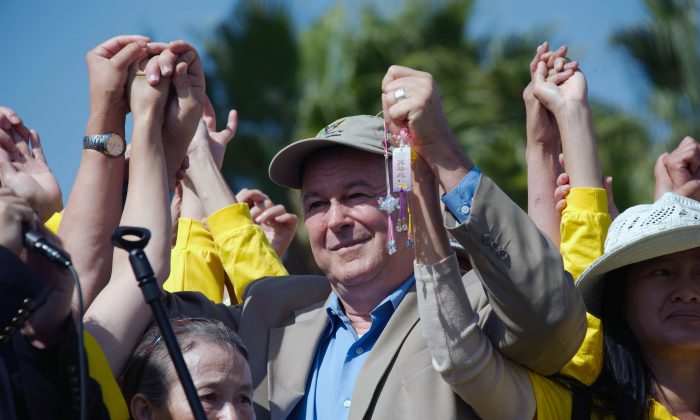 Rep. Rohrabacher holds hands as a symbol of unity with over 100 Falun Gong torture survivors at a rally in Long Beach, Oct. 20. (Robin Kemker/The Epoch Times)
US

Rep. Rohrabacher Speaks Out for Human Rights in China

Congressional Representative Dana Rohrabacher (R-Calif.) spoke on Oct. 20 at a rally at the Marina Green Park in Long Beach in support of human rights in China, particularly for Falun Gong practitioners.

Rep. Rohrabacher has long been a voice for freedom around the globe for many groups’ civil rights, among them, Falun Gong practitioners. Falun Gong has been persecuted in China since 1999.

“We have an obligation to stand up for other people who are suffering under tyrants’ heels,” said Rep. Rohrabacher, “because God granted us so much, a wonderful life here in freedom.”

He mentioned that our country hasn’t always lived up to our principles, but doing so is achievable. Being a devout Christian, he sees the merits of the Falun Gong practice, which is based on the principles of truthfulness, compassion, and tolerance.

“But we know it is up to us, all of us, to perfect ourselves and I see that with the Falun Gong talking about those aspects of the human soul that will make us more tolerant and more forgiving and energetic towards helping others,” said Rep. Rohrabacher.

Rep. Rohrabacher believes the West must place its principles above profit.

“We see the containers flowing in from China. We know that the people who are working in those factories are not free to make their own choices because of Americans who are making a profit on that oppression. We must act as American people. I say that our love of liberty must be greater than any love of profit or seeking profit by any member of our country,” said Rep. Rohrabacher.

As a member of the House Foreign Relations Committee, he recalled that one of the most embarrassing hearings occurred when a large American computer company admitted to designing and installing a system for the communist dictatorship to control Chinese people and even control criticism.

At that hearing, a woman testified that her son, a journalist, was tracked down via the system and arrested for criticizing the regime over the Internet.

“That is a disgrace. Americans, we either stand for liberty and we stand for justice, or we stand for nothing,” said Rep. Rohrabacher.

“We as Americans must—whatever race or religion or ethnic group we belong to—insist our country live up to those principles that are in our Declaration of Independence and our constitution,” he said.

“God Bless you for all you are doing today by being here. My prayers as a Christian are with you, and with those poor suffering people. Let us stand together and build a better world. Thank you very much.”