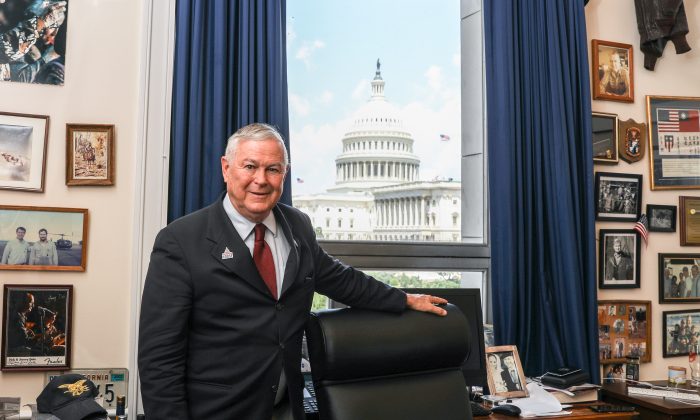 Rep. Rohrabacher: Movement to Quit the Communist Party Makes My Children Safer and the World Better

WASHINGTON—In an exclusive interview, Congressman Dana Rohrabacher (R-Calif.) said the movement for quitting the Chinese Communist Party (CCP), known as the “Tuidang” movement, will help achieve “a more peaceful world.” Because of it, “my children will be safer,” he said.

On June 8, Rohrabacher introduced into Congress H.Res.932, a resolution “Expressing solidarity with the Tuidang Movement whereby Chinese citizens renounce their ties to the Chinese Communist Party and its affiliates, and calling for an immediate end to the campaign to persecute Falun Gong practitioners.”

Rohrabacher said his legislation seeks to inform the American people about these “moral soldiers, these moral giants in our day, who are fighting under a desperate situation and risking their lives.”

He also wants to “make sure that we notify the Tuidang movement and the Falun Gong people that they are not alone, that the American people stand with them.”

The Tuidang Movement started at the end of November 2004, after the Epoch Times published “The Nine Commentaries on the Communist Party” on Nov. 19, 2004. That book describes the CCP as “an evil specter” and relates its history of mass killing and destroying China’s traditional morality and culture.

Since then every day there have been Tuidang declarations published at the Chinese-language Epoch Times’ special Tuidang section (http://tuidang.epochtimes.com), with numbers ranging from several hundred per day in the beginning to more than 100, 000 per day in recent years.

On March 23, 2018, the total number of people who have published their declarations to withdraw from the CCP and the CCP’s Youth League and Young Pioneers exceeded 300 million. Individuals in China often choose to use pseudonyms to protect themselves from being discovered by the state.

Less than three months later, Rohrabacher introduced H.Res.932, as he believed that the Tuidang Movement had “reached a threshold of success that needs to be recognized.”

Talking about the significance of the Tuidang Movement for the United States and China, Rohrabacher said that the CCP has not only caused “unnatural deaths of at least 60 million people in China,” but also “threatens world peace,” and has “destabilized the world. That’s why we had the Korean War, the war in Vietnam, and all the other conflicts.”

Rohrabacher believes that the Tuidang Movement is “vitally important,” as China is ruled by this “evil party.” If the Tuidang Movement can convince people not to join the evil force, to break away from CCP’s control, “that means they are protecting us; and they are doing what’s good for China as well.”

In 2005 the not-for-profit “Global Tuidang Center,” was established to “educate people about the destructive character of Communism, to assist all Chinese people worldwide to renounce the Chinese Communist Party and its affiliated organizations,” according to the Center’s website.

The Global Center reports that its “Rapid Tuidang Center” in 2015 alone made 912,413 manual phone calls to Mainland China to convince people to withdraw from the CCP and its affiliates, and 99,145 people agreed to do so.

The Rapid Tuidang Center is mainly sustained by Falun Gong practitioners worldwide who see the Tuidang movement as a form of peaceful civil disobedience that will help them secure their rights. Falun Gong has been persecuted by the CCP since July 1999.

The Rapid Tuidang Center also uses computer software to make automatic phone calls to China that play audio files about the Tuidang Movement; people can choose to push phone buttons or leave voice messages expressing their desire to quit. Volunteers will then listen to these recorded voice messages and help those who are ready to quit to publish their declarations on the Tuidang website.

Each year, 500-600 million automatic phone calls have been made to China via the“Rapid Tuidang Center” to help Chinese people learn about the crimes of the CCP and to encourage them to quit.

A large number of Falun Gong practitioners inside China also go out to talk to either their friends and relatives, or strangers on the street or at shopping malls, farmers’ markets, and so on, to inform people about the Tuidang movement and convince them to quit, at the risk of being reported to the police and arrested.

According to Rohrabacher, these people who make all these tireless and courageous efforts in all these years are real heroes.

“If the Falun Gong movement, if the Tuidang movement, is successful in China, it means a more peaceful world. My children will be safer, because of the courage that has been shown there. We want to have the people of the United States express officially that kind of appreciation.”