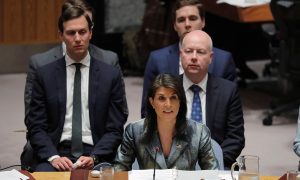 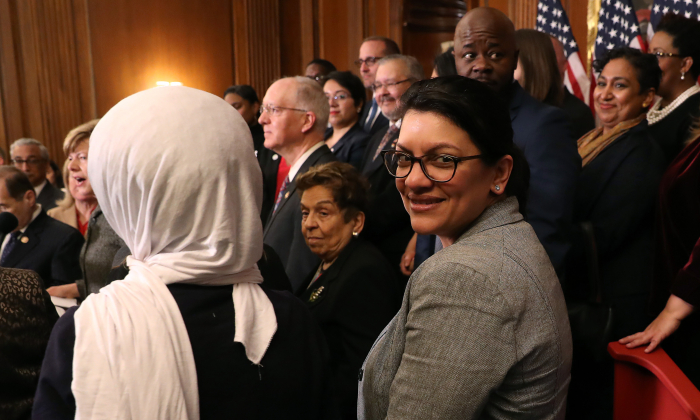 Rep. Rashida Tlaib Says She Feels More Palestinian in Congress Than Anywhere Else

Newly appointed Democratic Rep. Rashida Tlaib from Michigan, recently proclaimed that she feels more Palestinian in Congress than anywhere else in the world, according to a YouTube video.

Tlaib was speaking at the Michigan Coalition for Human Rights when she said, “Honestly I’ve never felt more Palestinian than I ever felt in Congress.”

Tlaib said that when she visits her grandmother in Palestine she’s recognized more like an American person but when she is in Congress, she’s identified as a Palestinian.

“Even in Palestine when I’m visiting my grandmother, I’m more Amrikiin [American], to the Palestinians. But I’m more Palestinian in the halls of Congress than I am anywhere in the country, in the world. And that just tells you just the fact that they weren’t ready for us. They really weren’t,” she said.

Most of Tlaib’s tenure in Congress has been about her advocacy for Palestinian concerns and her regular and failed attempts to construct a coalition to impeach President Donald Trump, according to the Conservative Review.

On her first day in office, the Detroit born congresswoman wiped off Israel from her office map. She also supported the Boycott, Disinvestment, and Sanctions (BDS) movement that works to end international support for Israel against Palestine.

Several people who Tlaib openly thanked for her successful congressional campaign have posted explicit pro-terror and anti-Semitic content on social media, including calls for violence, such as “kill every Zionist,” according to a report by the Israel Advocacy Movement (IAM).

“My family and friends did it in Chicago! In less than a week of planning, they really showed their strength and helped our campaign,” Tlaib wrote. “A special thank you to Ahlam Jbara, Mwafaq Jbara, Maher Abdel-qader, and my amazing Amo Abu Faris, Mufid Issa, who called people in Chicago while he was out of the country.”

Of the five people Tlaib thanked in her post, four have social media profiles and each one has made posts supporting known terrorists.

Ahlam Jbara appears in several photos with Tlaib. She has also posted photos of herself with Rasmea Odeh, a terrorist who was convicted and jailed for 10 years for her role in the murder of two students in the bombing of a supermarket in Jerusalem in 1969. Odeh’s American citizenship was revoked in 2015 because she concealed her terrorism conviction when applying for citizenship.

Reema Ahmed, another person who worked on Tlaib’s campaign, “liked” a cartoon in support of Odeh, and wrote a post in search of a T-shirt emblazoned with a large “I support Rasmea” graphic.

Ahlam Jbara made the “selfie” photo with Odeh’s profile image, called Odeh “an icon for all social justice fighters,” and even baked the convicted terrorist a birthday cake in 2014. Ahlam Jbara also shared a photo glorifying Mohammed Ali, the terrorist who stabbed three soldiers in Jerusalem.

Mwafaq Jbara, the second person mentioned in Tlaib’s post, posted “some of the most extreme content,” according to IAM, including hundreds of pro-terror posts.

In late March, immediately after special counsel Robert Mueller absolved President Trump of unproven conspiracies of collusion with Russia in 2016 election campaign,  Tlaib introduced a resolution in Congress “Inquiring whether the House of Representatives should impeach Donald John Trump, president of the United States of America.”