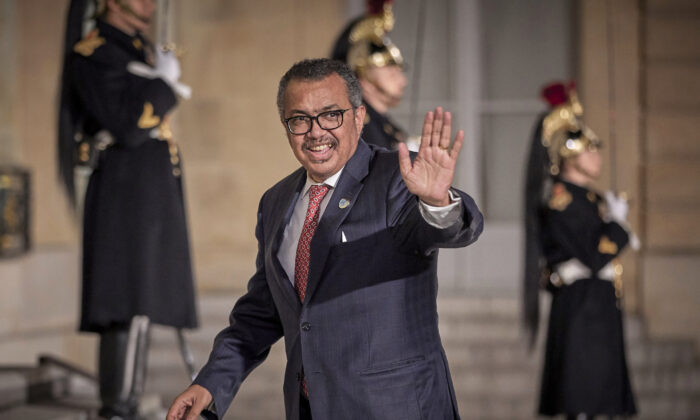 President Joe Biden’s proposed amendments to the World Health Organization’s (WHO) authority are “the greatest threat to our sovereignty that we’ve faced in a long time,” Rep. Ralph Norman (R-S.C.) told The Epoch Times on May 23.

“For this administration to sell this country down the river like he’s doing, to deal with somebody who is under the influence of China, who is a person who has not had the first inclination to investigate where the coronavirus came from, to give him more authority?” the South Carolina Republican asked. “We’re going to ring the bells.”

The individual whom Norman was referencing is Tedros Adhanom Ghebreyesus, a former government minister from Ethiopia who has been the WHO’s director-general since 2017.

As previously reported by The Epoch Times, Tedros would receive significant authority to act unilaterally if a package of Biden administration-proposed amendments to the United Nations International Health Regulations (IHR) are adopted. The IHR defines WHO’s regulatory powers regarding public health issues around the world.

Biden’s amendments are to be considered this week during the annual conference in Geneva of the World Health Assembly, the decision-making body of the WHO. The United States provides more than $150 million in assessed contributions to fund the WHO, and has given on average an additional $262 million in annual voluntary funding since 2012.

Under the proposed amendments, WHO would be empowered to declare a public health emergency in any country regardless of whether officials in the country concur with the declaration. The WHO director-general also would be allowed to rely on evidence from sources other than those approved by the affected country as the basis of such a declaration.

The Biden WHO amendments are the latest step in the current president’s efforts to reintegrate the United States with WHO after his predecessor, President Donald Trump, slashed U.S. funding to the international health organization and then gave notice of U.S. withdrawal in 2020. Biden during his first week in the Oval Office repealed Trump’s withdrawal notice.

While the amendments were drafted at the U.S. Department of Health and Human Services and circulated among WHO officials in January, the proposals weren’t publicly discussed by federal officials until April.

Asked if he expects that a Republican congressional majority, if elected in November, would move to defund the United States’ contributions to WHO, Norman said: “This is a complete sellout. It shows the corruption of the administration and, yes, we are going to do everything we can, particularly if we can take the House with good numbers that will give us leverage, and the Senate as well.”

The United States was assessed $120.5 million in WHO dues for fiscal 2020, although only about half of that amount was paid before Trump issued his withdrawal notice. The United States has also provided additional annual voluntary contributions totaling on average $262 million since 2012.

In a related development on May 23, the House Freedom Caucus, an assembly of the lower chamber’s most reliably conservative members, made public its letter to Biden demanding that he “halt your efforts to empower [WHO] and instead either immediately resume President Trump’s withdrawal from the body or, at the very least, push serious reforms to aggressively correct the organization’s rampant corruption and ineffectual leadership.”

Meanwhile, Tedros was reappointed to a second five-year term as director-general;  no opposition candidates were submitted.

The House Freedom Caucus also told Biden that “not only did you fail to propose an alternative candidate to Dr. Tedros … you are now attempting to hand him more control. We call on you to instead use the 75th World Health Assembly as an opportunity to demand a radical course correction and change in leadership.”

A copy of the letter was made available to The Epoch Times. Norman is one of the group’s 42 House members.

The letter further says that “as efforts continue by WHO Member States to negotiate a ‘global pandemic treaty,’ we demand that you provide the American people with total transparency and respect for our nation’s sovereignty. Under no circumstances should you cede our government’s operational control in a public health emergency to an international body.”

If such a treaty is agreed upon by WHO members, the letter stated, “we expect you to fully comply with Article II, Section 2 of the U.S. Constitution, which clearly states that ‘the President shall have Power, by and with the Advice and Consent of the Senate to make Treaties, provided two-thirds of the Senators present concur.’”