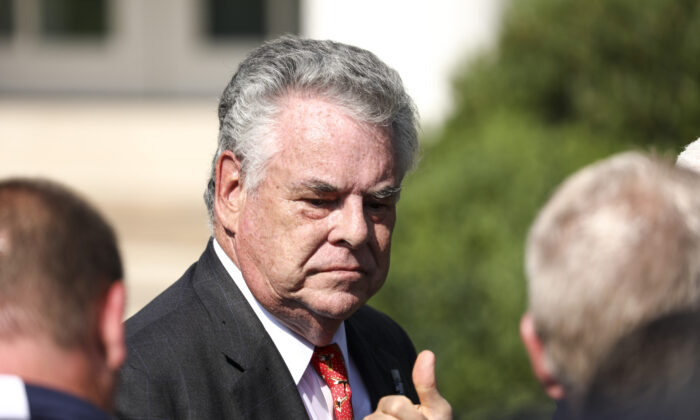 Rep. Pete King (R-N.Y.) said he will not be seeking reelection in 2020, citing the desire to spend more time with his family.

“The prime reason for my decision was that after 28 years of spending 4 days a week in Washington, D.C., it is time to end the weekly commute and be home in Seaford,” King, who has been in office for 14 terms, said in a Nov. 11 announcement.

He said he made the decision after consulting with his wife, Rosemary, and his children, Sean and Erin.

“This was not an easy decision. But there is a season for everything and Rosemary and I decided that, especially since we are both in good health, it is time to have the flexibility to spend more time with our children and grandchildren. My daughter’s recent move to North Carolina certainly accelerated my thinking,” King said.

“My time in Congress has been an extraordinary experience—an experience I wouldn’t have even dared imagine when I was a kid growing up in Sunnyside or a college student loading and unloading trucks and freight cars at Manhattan’s West Side Railway Terminal. I intend to remain in Seaford, be active politically and look forward to seeing what opportunities and challenges await me in this next chapter of a very fortunate life.”

King, 75, said he’d complete his current term in office, which ends on Dec. 31, 2020. He suggested he could have won another term, citing strong polling and the more than $1 billion he has in campaign funds.

King won the 2018 election for New York’s 2nd Congressional District against Democrat challenger Liuba Grechen Shirley with about 53 percent of the vote. He went unchallenged in the Republican primary.

Senate Minority Leader Chuck Schumer (D-N.Y.) said in a statement about King’s retirement: “Peter King stood head & shoulders above everyone else He’s been principled & never let others push him away from his principles.”

Peter King stood head & shoulders above everyone else

He’s fiercely loved America, Long Island, and his Irish heritage and left a lasting mark on all 3

I will miss him in Congress & value his friendship https://t.co/GSXizZ2c5D

With King’s impending retirement, there are now 19 Republican members of the House who are not seeking reelection. Four of those are seeking other offices.

Some Democrats have claimed that the retirements will make retaking the House difficult for the GOP. But despite the wave of retirements, Republican leaders have expressed confidence about the 2020 elections.

“Retirements in safe Republican seats like these have no impact on battleground seats,” Bob Salera, a spokesman for the National Republican Congressional Committee, told The Epoch Times.