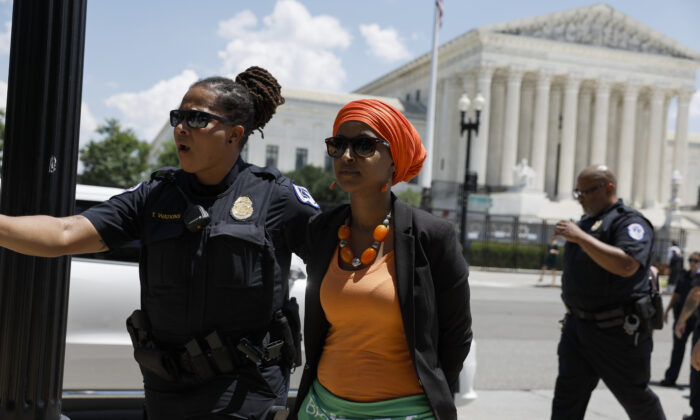 Rep. Ilhan Omar (D-Minn,) is detained by U.S. Capitol Police Officers after participating in a sit in with activists from Center for Popular Democracy Action (CPDA) in front of the U.S. Supreme Court Building in Washington on July 19, 2022. (Anna Moneymaker/Getty Images)
Democrats

Rep. Omar Among 17 Members of Congress Arrested During Abortion Protest Outside Supreme Court

Reps. Carolyn Maloney (D-N.Y.) and Ilhan Omar (D-Minn.) were among 17 members of Congress arrested July 19 outside the Supreme Court in Washington.

“There is no democracy if women do not have control over their own bodies and decisions about their own health, including reproductive care,” Maloney, the chairwoman of the House Oversight Committee, said in a statement.

“Today I was arrested while participating in a civil disobedience action with my fellow Members of Congress outside the Supreme Court. I will continue to do everything in my power to raise the alarm about the assault on our reproductive rights!” Omar wrote on Twitter, sharing video footage showing her being escorted away by Capitol Police.

The U.S. Capitol Police said that protesters were blocking traffic in violation of the law outside the court, triggering three warnings.

A total of 35 arrests were made. Seventeen of those arrested are members of Congress, the law enforcement agency said.

The specific law violated is D.C. Code 22-1307, which prohibits people, whether acting alone or with others, from crowding or obstructing the use of any street in the city.

Violators of the misdemeanor can be imprisoned for up to 90 days and fined up to $500.

Members and other protesters said they were voicing concerns with the Supreme Court’s recent decision in Dobbs v. Jackson Women’s Health Organization, which prompted the court to strike down Roe v. Wade—the 1973 ruling that declared access to abortion a constitutional right—and a similar ruling in Planned Parenthood v. Casey.

“The Constitution does not confer a right to abortion; Roe and Casey are overruled; and the authority to regulate abortion is returned to the people and their elected representatives,” Justice Samuel Alito, a George W. Bush appointee, wrote for the majority.

In the wake of the decision, a number of state abortion bans that had been deemed unenforceable or expressly kept in reserve in preparation for Roe being struck down came back into play, and Republicans in Congress have floated a national ban.

Maloney and Rep. Katherine Clark (D-Mass.), among other members who were arrested on Tuesday, expressed concerns about such a measure.

“The extremist Republicans are determined to take us back in time and take away our rights,” Clark, the assistant speaker of the House, said in a statement.

“We are gathered here today because many of us have never been arrested for anything, but this is something that we all care deeply about,” Speier told reporters.

“We will do whatever is necessary to protect people and their bodies and this is one of the acts that we will engage in to make sure that those who have the ability to have control over their bodies and have historically will be able to do so in the future,” she added.