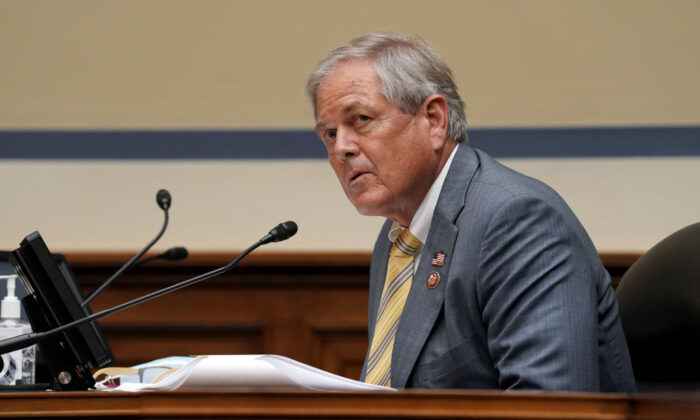 Congressman Ralph Norman (R-S.C.) said that President Joe Biden’s first year in office has been a failure on many fronts, including his not taking strong enough actions against the Chinese Communist Party (CCP) ahead of the Winter Olympics in Beijing.

Norman told NTD’s Capitol Report program that Biden should take stronger action against the CCP for deceiving the global community about the severity of the virus when the pandemic first started.

“Well, it should be enough is enough,“ said Norman during a recent interview on the Capitol Report. “We know it came from the lab. But it’s just an ongoing pattern of letting China and all the other rogue countries get by with hating America, and we’re paying a price for it.

“Look what we pay with COVID. We shouldn’t even be participating in the Olympics. I know he says that there’ll be no officials that attend there. But we need to do but more than that,” Norman added.

The White announced in December that they would not send diplomats to the Winter Games in protest of the CCP’s human rights violations.

“The Biden administration will not send any diplomatic or official representation to the Beijing 2022 Winter Olympics and Paralympic Games given the PRC’s ongoing genocide and crimes against humanity in Xinjiang and other human rights abuses,” Jen Psaki told reporters during a Dec. 6, 2021 press conference.

Norman believes that the U.S. government is condoning the human rights abuses by the CCP and the assault on freedom by not completely boycotting the Winter Games in Beijing.

“Basically, that’s just intolerable. You don’t condone that. And by participating in the Olympics, as well as look at the basketball teams that go there all for the greed of money, but you just overlook the human rights violations that have continued and will continue under the communist regime,” said Norman “And to infiltrate our great country. It’s sad, to say the least.”

Norman was also critical of Biden’s performance as commander and chief when asked how his first year in office has been. “Steve, this administration has in a short 11 months, totally derailed this country.” He went on to list the issues his constituents are concerned with including the Afghanistan withdrawal, the CCP’s threatening posture with Taiwan, and the ongoing inflation rates.

“They want results that are pro-Constitution. They want to get back to live their lives, and with the inflation rate where it is today, people … feel it in their pocketbooks, I guess is the best way to say it. But his first year has been a total disaster.”

Meanwhile, Rep. Hakeem Jeffries (D-N.Y.) the Chairman of the House Democratic Caucus, praised the Biden administration’s first year as a resounding success in the midst of extreme challenges.

“Well, President Biden has had a very good year, under incredibly difficult circumstances. 6.4 million good-paying jobs have been created during Joe Biden’s first year. That’s a Presidential Record,” Jefferies told an NTD reporter during a recent press conference. He also praised the over 200 million COVID-19 vaccinations, the Democrats’ extended child tax credits, rejoining the Paris Climate Accord, the infrastructure bill, and the 6.4 million jobs that he said were created by Biden’s policies.