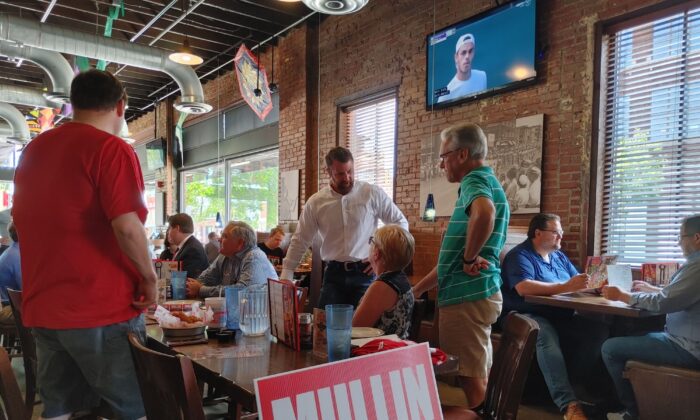 Oklahoma Republican US Senate Primary to Be Resolved in August Runoff

OKLAHOMA CITY, Okla.—Rep. Markwayne Mullin (R-Okla.) on June 28 secured the most votes in the Republican primary for the U.S. Senate but did not clear the 50 percent threshold necessary to avoid a runoff.

The winner of the runoff is widely expected to win in the general election in the deep red state on Nov. 8 and fill the seat being vacated by Sen. Jim Inhofe (R-Okla.)

Kendra Horn, who served as a U.S. representative in Oklahoma’s 5th Congressional District from 2019 to 2020, was unopposed in the Democratic primary and will face the winner of the runoff in November.

Thirteen Republican candidates battled to replace Inhofe, who took office in 1994 and was elected to a fifth term in 2020 before announcing in February 2022 that he would retire, effective January 3, 2023.

Mullin, a former professional mixed martial arts fighter who was first elected to Oklahoma’s 2nd Congressional District in 2013, held a comfortable lead in the polls. He also had a 3-to-1 advantage in fundraising over the other candidates.

The 44-year-old Mullin owns Mullin Plumbing and Mullin Farms among several other businesses. He is a staunch advocate of former president Donald Trump’s America First platform and is an outspoken supporter of the Second Amendment, the pro-life movement, and completing the wall on the U.S.-Mexico border.

A former Oklahoma House speaker, Shannon finished second to Sen. James Lankford in the 2014 GOP primary. He was an Oklahoma state representative from 2006 to 2014 before leaving the state legislature and serving as CEO of Chickasaw Community Bank in Oklahoma City.

Mullin and Shannon have similar views on multiple topics, including religious values, protecting the Second Amendment, and abortion. Like Mullin, Shannon is pro-Trump. Both candidates have not been shy about voicing firm opinions.

Shannon, who is black, is against abortion, has called Planned Parenthood racist, and in May tweeted, “Black babies have been targeted by the abortion lobby and the Dems since day one. Don’t you dare say ‘Black Lives Matter’ til you admit that black babies matter.”

Shannon also speaks out about claims that America has systemic racism.

“That narrative goes something like this, unless you’re from a specific zip code, of specific heritage, then America doesn’t work for you and the truth is that’s a lie,” Shannon told KOCO News 5 in Oklahoma City. “I’m proof that narrative is a lie.”

In late April, in response to the five fetuses that were discovered in Washington D.C. and speculated to have perished because of partial-birth abortions, Mullin introduced the Partial-Birth Abortion is Murder Act.

If signed into law, the legislation would increase penalties for individuals who violate the Partial-Birth Abortion Act of 2003 to a minimum of five years and a maximum of life in prison without the possibility of parole.

The same organization has reportedly taken credit for more than a dozen attacks in recent months at churches and pregnancy centers.

Congressional Republicans, including Mullin, urged the Department of Homeland Security to classify Jane’s Revenge as a domestic terrorist organization.

“It’s past time the Biden Administration quits with the complacency and investigates these members for exactly what they are: domestic terrorists,” Mullin told reporters.

Mullin and his wife, Christie, met in elementary school and they have six children, three biological and three adopted.

The couple tried for seven years to have a child, but Christie suffered from endometriosis, Mullin explained. Christie had a miscarriage, which “was emotionally devastating” for the couple.

“It is hard to understand why anyone would say, ‘It’s just a fetus,’ and end that life,” Mullin told The Epoch Times. “I have respect for mothers who were courageous and delivered their babies to give parents who cannot have children the opportunity to provide loving homes.

“These are future leaders, future parents, future entrepreneurs, and future Americans, and they deserve the right to be born,” said Mullin, who is a member of the Cherokee tribe. “The Roe v. Wade decision is a positive start, but we need to keep fighting to make sure that no baby can be killed.”

In a deep red state, all candidates are proponents of Trump, though the former president has not endorsed anyone. Trump won Oklahoma with 65 percent of the vote in 2020.

Mullin is not guaranteed victory in a runoff, even with a substantial lead in the polls, according to Oklahoma City political consultant Mark Yates.

“The landscape completely resets” in a runoff, Yates added.

If Yates is correct, Shannon will benefit.

Mullin agrees that a runoff is ideal for candidates who are behind in the polls.

“If I was in second place, I would love the idea of a runoff,” Mullin told The Epoch Times with a grin when he was asked about the concept of runoffs. “It’s a different story when you are leading in the polls, and if you finish in first.

“If a runoff happens, and we are there, it is like starting a new campaign,” Mullin added. “You only have one opponent instead of 12, and it is important to reach as many people as possible since, typically, runoffs have a lower voter turnout.”

Lankford, who was first elected to his Senate seat in 2014, secured 74 percent of the vote.