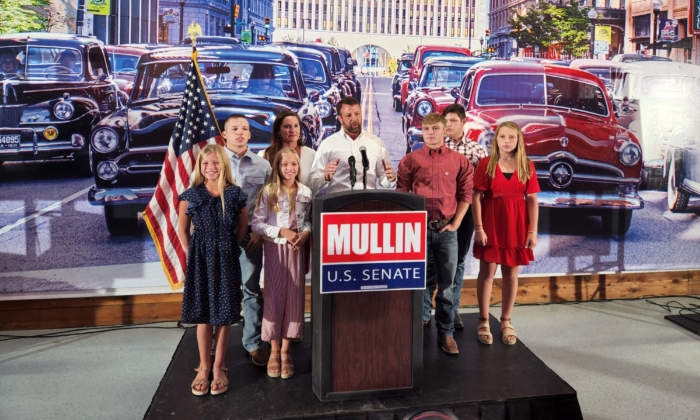 Rep. Markwayne Mullin is joined by his family during his victory speech in Tulsa on Aug. 23 after winning the Oklahoma GOP primary runoff. (Jeff Louderback/The Epoch Times)
2022 Midterm Elections

With 74 percent of the votes tallied at 9:30 p.m. on Aug. 23, Mullin won with 66 percent compared to 34 percent for Shannon, according to Decision Desk HQ.

In the first round of the primary in late June, Mullin received 43.6 percent of the vote and Shannon finished second at 17.5 percent in a field of 13 candidates. Since neither surpassed 50 percent, a runoff was required to determine the Republican nominee.

Inhofe, 87, took office in 1994 and was elected to a fifth term in 2020 before announcing in February that he will retire, effective Jan. 3, 2023. That prompted the special election.

In November’s general election, Mullin will face former Democratic U.S. Rep. Kendra Horn, who was a U.S. representative in Oklahoma’s 5th Congressional District from 2019 to 2020.

Republicans are heavily favored to prevail in the general election, which made the GOP primary especially significant. Oklahoma voters have not elected a Democratic U.S. Senator in more than 30 years.

Mullin, 45, is a former professional MMA fighter and entrepreneur who owns a ranch and a plumbing company among other enterprises.

He has represented Oklahoma’s 2nd Congressional District since 2013 and is completing his 10th term.

Now 44, Shannon served eight years in Oklahoma’s state house and was named the youngest Speaker of the House in Oklahoma history.

He stepped away from politics when he was 36, finished his law degree at Oklahoma City University, and became CEO of Chickasaw Community Bank in Oklahoma City.

Both candidates centered their campaigns around a pro-Trump, America First platform; and they agree that there was fraud in the 2020 presidential election.

Oklahoma is a state where almost 10 percent of the population has Native American heritage. Mullin is a Cherokee citizen and Shannon is a member of the Chickasaw Nation.

Both candidates are outspoken about the United States’ current dependence on foreign oil, the southern border crisis, pro-life measures, and gun ownership rights, among other issues.

Mullin has generated around $3.6 million for his campaign. That figure is almost three times more than Shannon’s $1.3 million.

Mullin and Shannon consistently said they are “citizen candidates” during their campaigns.

“In the lower chamber, we really deal with the legislative side of things. The Senate helps determine how federal agencies affect us,” Mullin told The Epoch Times. “Bureaucrats are making it almost impossible to create jobs they want to be created because of regulations from agency officials. Heads of agencies are confirmed by the Senate. That is where the fight is.”

Shannon responded by pointing out that Mullin’s tenure in Washington does not make him a “citizen candidate.”

“There are some clear contrasts between me and my opponent. It’s really our record, and the good news is that we both have a record,” Shannon told Oklahoma City’s KOCO News. “My opponent, he has his record that he has to stand on and defend of being in the swamp for the last 10 years, so that’s the real difference.”

Mullin and Shannon recognized that a runoff was likely when 13 Republican candidates were on the ballot on June 28.

Shannon hoped that the two months between the primary and the runoff would give him enough time to tell his story and overcome Mullin’s significant fundraising advantage.

Shannon told The Epoch Times in June that “America is home of systemic opportunity, not systemic racism. The far-left narrative says that, unless you’re from a specific zip code and of a specific heritage, then America doesn’t work for you. I’m proof that narrative is a lie.

“I was elected to the state legislature when I was 33 years old and then became the state’s youngest Speaker of the House. Now I’m the CEO of a bank,” Shannon added. “That only happens in America.”

Shannon told reporters a day after the June 28 primary that “Markwayne is a friend” but “there are differences between us.”

“I’m an America First and Oklahoma Always candidate. He (Mullin) is part of the D.C. establishment,” Shannon said.