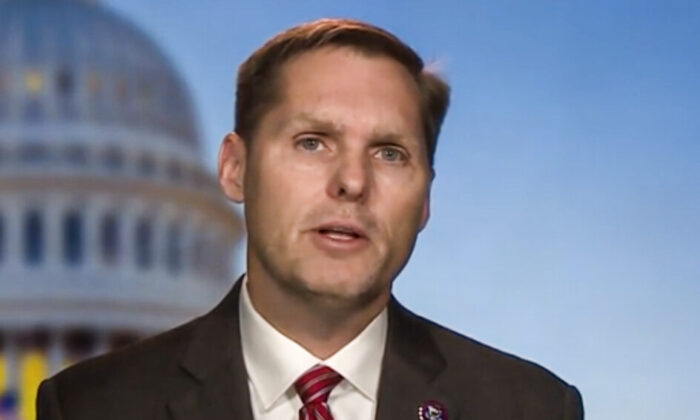 Vice ranking member of the Committee on Homeland Security Rep. Michael Guest (R-Miss.) said the Biden administration should have been proactive in deescalating Russian aggression toward Ukraine, but regardless now needs to take a forceful stance with Russian President Vladimir Putin.

“I think that we should have been much more aggressive very early on—not only us but, our European allies, NATO,” Guest told NTD’s Capitol Report, Steve Lance in a February 7 interview. “This buildup that we’ve seen going on in Russia has been going on now for months.”

“So, we’ve been aware of it, but we’ve basically turned a blind eye to it. We’ve been too focused on the Build Back Better plan here, on other pieces of domestic legislation, and we’ve failed to keep our eye on the ball of what’s happening across the globe. And so now we’re trying to play catch-up.”

“We believe that there is a very distinct possibility that Vladimir Putin will order an attack on Ukraine. It could take a number of different forms. It could happen as soon as tomorrow or it could take some weeks yet,” said Sullivan.

Russia has amassed some 100,000 troops on its border with Ukraine, some for joint military exercises in Belarus, but insists it has no intentions of invading Ukraine.

Sullivan also said that the Biden administration is working with NATO allies to reinforce Ukraine’s eastern border with troops, “but at the same time, to send a clear message to Russia that we are prepared to walk the diplomatic path to address our mutual security concerns.”

Guest acknowledged that the Biden administration is working hard to de-escalate tensions with Russia, but he said, “We should have been building our military alliance, building our alliances with sanctions going forward, and letting the Russian administration know that if they choose to do this, that there will be severe consequences.”

Guest said Congress has been briefed that Putin could invade Ukraine any time now, in the dead of winter when the ground is frozen, making access much easier. He said the United States and NATO should be ready for military action against Russia.

“I believe that we need to continue to position NATO troops along with countries that border Ukraine to make sure that Russia understands that if they were to cross the Ukrainian border into any other troops that there will be severe military action that would be taken against Russia.”

Guest stressed the United States and allies should first “take crippling economic sanctions against Russia, if they choose to move into Ukraine.”

President Joe Biden told reporters at a Feb. 7 press conference one of the sanctions he would use is canceling the Russian gas pipeline Nord Stream 2 deal.

“If Russia invades that means tanks or troops crossing the border of Ukraine. Then there will be no longer a Nord Stream 2,” said Biden. “We will bring an end to it.”

Sullivan made it clear that the administration is ready to respond to Putin no matter what route he takes.

“If President Putin chooses to continue to engage in diplomacy and we are serious about that, and we are ready to respond in a united swift and severe way with our allies and partners, should he choose to move forward with a military escalation.”