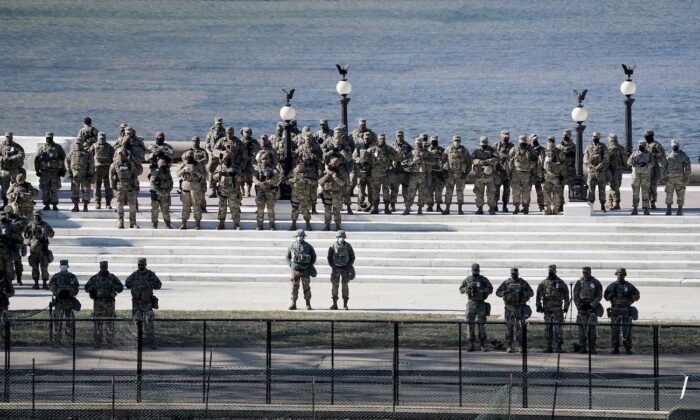 Members of the National Guard listen to President Joe Biden give his inaugural address during the 59th Presidential Inauguration at the U.S. Capitol in Washington on Jan. 20, 2021. (Greg Nash/AFP via Getty Images)
Congress

Rep. Lisa McClain (R-Mich.) joined with other House Republicans in asking House Speaker Nancy Pelosi (D-Calif.) to explain why the National Guard needs to be deployed in Washington until possibly fall of this year.

“The only briefings that we’ve had, through the media really, is that the troops may be staying there through the fall,” McClain told Fox in a Feb. 15 interview. “Which is extremely concerning because myself and several of my colleagues have asked Nancy Pelosi for a briefing as to: ‘Why do we need these troops here?’ And we have received zero information, zero.”

Pentagon spokesperson John Kirby said last week that the estimated cost for National Guard protection at the Capitol complex through March 15 will cost taxpayers a total of $483 million. $284 million to cover personnel and $199 million to cover operations.

“It’s amazing to me that she can do this without any disclosure, without any information, and just continue to spend money with no briefing. [It] doesn’t make sense to me,” McClain said.

Tens of thousands of National Guard troops were deployed to Washington to assist with security in the wake of the Jan. 6 Capitol breach.

Around 5,000 troops were expected to remain in the city until March 15, but that period seems to have been extended by Pelosi. It’s unclear whether there’s any specific threat.

“Just tell me why. I feel like there’s a boogeyman under my bed,” said McClain, who sits in the House Armed Services Committee.

“Washington, D.C., is an absolute ghost town. I feel completely safe. There’s no one there.”

Kirby said on Feb. 12 that there were more than 6,000 troops deployed in Washington.

“I think the number today is—I don’t want to guess. It’s 6,061. As of today, they continue to support the FBI, the Capitol Police, the Park Police, Secret Service, and the city of Washington, and I know of no changes to the mission requirements,” said Kirby.

In late January, 42 House Republicans sent a letter to Pelosi urging her to remove the barricades surrounding the Capitol.

Rep. Ted Budd (R-N.C.), the primary signatory of the letter (pdf), said in a statement that the request is for Pelosi to remove what some fear is poised to become “permanent military-style fencing.”