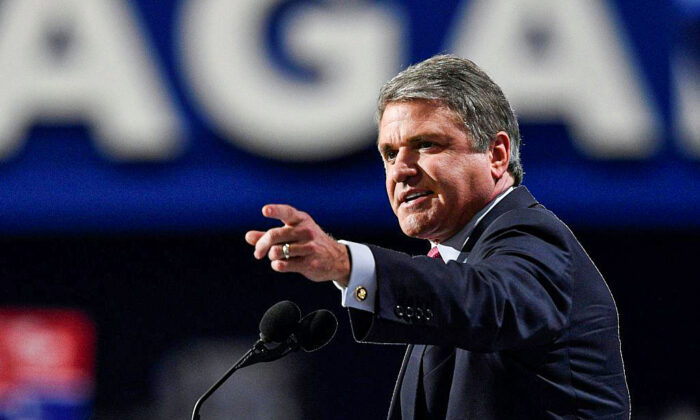 Congressman Michael McCaul makes a point to delegates during the evening session of the Republican National Convention at the Quicken Loans Arena in Cleveland, Ohio, on July 18, 2016. (Dominick Reuter/AFP via Getty Images)
US-China Relations

House Republicans lambasted the Biden administration for a perceived lack of action against growing hostilities from China’s reigning communist regime.

Rep. Michael McCaul (R-Texas) and several other Republican lawmakers said in a Sept. 8 press conference on the subject of China that a GOP-controlled Congress would do better in holding the Chinese Communist Party (CCP) accountable.

McCaul singled out the administration’s decision to terminate Trump-era anti-espionage initiatives and an apparent failure to bring forth many high-profile charges in related lawsuits.

“They shut down the China initiative that the Trump administration started,” McCaul said.

“Guess what? Espionage hasn’t gone away.”

The China Initiative was an anti-espionage program headed by the Justice Department that sought to root out and prevent massive efforts by the CCP to steal research and technology.

The Biden administration terminated the program in February, citing concerns of racial discrimination against Asians. An internal DOJ investigation found no evidence of discrimination, but the department ended the program anyway, in order to avoid what it termed a “harmful perception” of bias.

McCaul said that the initiative had brought 130 indictments under the Trump administration, but said that since Biden took office, his administration had only brought charges against 19 suspects.

Meaningfully, the press conference took place near Houston, Texas, which was the focal point of an espionage episode in 2020, when it was discovered that the Chinese consulate there was coordinating a massive illegal spying ring as part of the CCP’s broader espionage campaign in the United States.

McCaul said that the research and technology stolen by that operation and others like it was used by the CCP to create advanced weapons, including a nuclear-capable hypersonic missile that was launched last year.

Republicans have maintained that the CCP has been using stolen American technologies to manufacture advanced weapons for many years and, in October 2021, issued an open letter to that effect.

“It is likely that U.S. software and tools contributed to the creation of this weapons system, because of our country’s permissive export controls and licensing policies with China,” the letter said.

Likewise, McCaul said that the administration’s lackluster China policies were allowing the CCP to create a “war machine” using stolen American technologies, and warned that continued weakness, real or perceived, would only lead to more aggression from the regime.

“Why is the Biden administration so weak on China?” McCaul said.

“Weakness invites aggression, and that is the tone of this administration.”